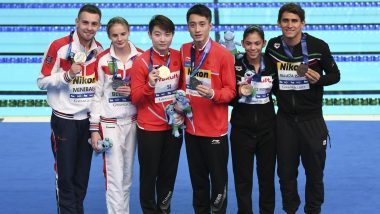 Russian pair Ekaterina Beliaeva and Viktor Minibaev were distant runners-up on 311.28 points followed by Mexicans Maria Jose Sanchez and Jose Balleza Isaias, who took bronze with 287.64. For Si, who took silver behind Ren in the women's 10m platform at the 2016 Rio Games, it was a fourth world title.

The 10m Mixed Synchro final treated us to some excellent entertainment, as illustrated here by Lian Junjie and Si Yajie of China, who walked away with a gold medal for their efforts. Follow the action live on 💻 https://t.co/bEozhdW5qV. #FINAGwangju2019 #Diving pic.twitter.com/cgcZ7WzMRd

She captured the 10m gold as a 14-year-old at the 2013 Barcelona championships, won the mixed synchro with Tai Xiaohu in Kazan two years later and partnered Ren to victory in the women's 10m synchro in 2017.

Britain's Robyn Birch and Noah Williams narrowly missed out on a medal in the first of three diving finals on Saturday. The women's one-metre springboard and the men's three-meter springboard synchro take place later on Saturday.

All 13 diving events count as qualifiers for the 2020 Tokyo Olympics.

(The above story first appeared on LatestLY on Jul 13, 2019 01:09 PM IST. For more news and updates on politics, world, sports, entertainment and lifestyle, log on to our website latestly.com).