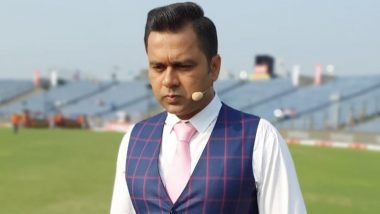 Former Indian opening batsman and commentator lashed out at few Pakistani cricketers, who claimed that India had deliberately lost their ICC Cricket World Cup 2019 league stage match against England to ensure that Pakistan does not qualify for the knockout stages of the tournament. India, Australia England and New Zealand were the four teams that progressed to the semi-finals of CWC 2019 while Pakistan missed out on run-rate despite having the same points as Kane Williamson’s men. Aakash Chopra Reveals He Was Subject to Online Abuse After Excluding MS Dhoni From His 2020 ICC T20 World Cup Squad.

Reacting to the defeat, Waqar Younis had put out a tweet which suggested that India had thrown away the match purposefully. Most recently, former PAK all-rounder Abdul Razzaq commented on the same and said that there was no doubt that India had lost the game on purpose. “There is no doubt that India lost on purpose. I had told this at that time as well. In fact, everyone else opined the same. For a person [Dhoni] who can hit fours and sixes at will, he was blocking everything…Hence, one tends to know,” Razzaq had claimed. Yuvraj Singh Speaks Up on Controversy Regarding Comments on Yuzvendra Chahal, Former Cricketer Issues Statement; Says ‘Never Believed in Disparity’.

But their reactions and claims that India had lost to prevent Pakistan from qualifying for the semis certainly did not go well with Chopra, who in his latest AakashVani YouTube show hit back at the Pakistani cricketers for their comments.

Aakash Chopra Lashes Out At Pakistani Cricketers for False Claims

“Some former Pakistan cricketers seem to have passed the verdict. They are saying that India lost the match to England intentionally to ensure Pakistan doesn’t go through. They are even suggesting that ICC should fine India and something like this is not acceptable. How can they even suggest something like that,” said Chopra reacting to the episode. He then went on to explain the entire match and why India had conceded that many runs which eventually led to their loss.

“One needs to look at the circumstances the teams were in...the boundary at one side was very small, and England scored 337 on a placid track. Every bowler went for runs although India did bounce back in the last ten overs and I was commentating on the match,” he added.

It's not who you are.. What you do in life defines who you are.. Me not bothered if Pakistan gets to the semis or not but one thing is for sure.. Sportsmanship of few Champions got tested and they failed badly #INDvsEND #CWC2019

Chopra also hit out at Younis and Razzaq for their comments. “Think a little and have some shame. Waqar Younis, despite being the brand ambassador for the ICC, gave a statement during the World Cup that India threw the match away on purpose. I mean seriously,” the 42-year-old said.

“Former Pakistani cricketers are openly saying that India lost deliberately and ICC should fine them. How can you think like that? It was more important for India to top the group at that time,” he added. India lost that game by 31 runs and it remained their only defeat in the league stage of the World Cup before a heart-breaking semi-final loss to New Zealand in the latter stages.

Claims that India has deliberately lost against England resurfaced after English all-rounder Ben Stokes in his book “On Fire: My Story of England's Summer to Remember” said that he was ‘mystified’ by India’s approach to the game. But after it led to an uproar of claims that was blaming India of losing intentionally, Stokes clarified that he had never suggested anything like that.

“It is understandable if the partnership between Virat Kohli and Rohit Sharma didn’t make sense to Stokes or if he was confused by Dhoni’s approach towards the end. But he never said that India deliberately lost the match,” Chopra concluded his video.

(The above story first appeared on LatestLY on Jun 05, 2020 10:18 PM IST. For more news and updates on politics, world, sports, entertainment and lifestyle, log on to our website latestly.com).