Andrew Balbirnie, Ireland Captain, Says Any Indian Team You Play Is Going To Be a Good Team

On Sunday, when India will play the first of two T20Is against Ireland in Dublin, at the same time in Leicester, England, the first-choice players will be participating in the tour match against Leicestershire in the run-up to preparation for the rescheduled Edgbaston Test from July 1-5. 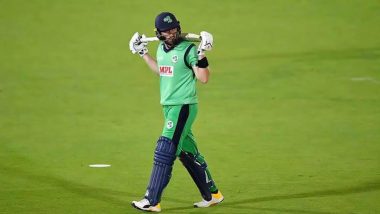 Dublin, June 25 : On Sunday, when India will play the first of two T20Is against Ireland in Dublin, at the same time in Leicester, England, the first-choice players will be participating in the tour match against Leicestershire in the run-up to preparation for the rescheduled Edgbaston Test from July 1-5. This scenario of fielding two different Indian teams at the same time happened last year as well, when India toured Sri Lanka for white-ball games while the first-choice players were in England for the Test series. IND vs IRE 1st T20I 2022 Preview: Likely Playing XIs, Key Battles, Head to Head and Other Things You Need To Know About India vs Ireland Cricket Match in Malahide.

But Ireland skipper Andrew Balbirnie is unperturbed about the first-choice players giving two T20Is a miss, saying that any side fielded by India will always be a good one. "Nowadays, any Indian team you play is going to be a good team. It kind of shows the depth of Indian cricket that they can put out two teams. We couldn't do that --there's no way we could put out a Test team and a T20 team at the same time, we just don't have the numbers for that," said Balbirnie in the pre-series press conference.

Balbirnie went on to credit the Indian Premier League (IPL) for giving India a huge depth of players and added that at the same time, it gives opposition teams like his side ample footage to do the homework on the visitors. "With the IPL being so successful over a number of years, a lot of young guys are coming in and putting their names forward to get into that first eleven for India. And with the (50-over) World Cup in October (next year), there'll be a lot of guys looking for those places. So we know it's going to be a good Indian team and we have to be at our best to try to force a result.

"The good thing about the IPL is that you get to see all these players pretty much every day, there's a game every day when the IPL is on. So we have a lot of footage of these guys -- bowlers and batters. There's plenty of homework being done; Scott Irvine, our performance analyst, has done a lot of work. So we have the tools there. It's all well and good having the footage and stuff, (but) we got to go outside and execute our skills. "Certainly the homework will be done before we go out there on Sunday, 100%." SL vs AUS, Test Series 2022: Glenn Maxwell Banking on Ability To Tackle Good Spin Bowling in Tough Conditions After Test Recall.

With tickets for both T20Is at Dublin sold out, Balbirnie hopes for a great atmosphere at the ground for matches on Sunday and Tuesday. "I think the intensity goes up, naturally the noise is incredible. You almost can't hear yourself. I think there's 10 or 11 thousand people going to be here on Sunday and potentially 9000 of them will be Indian supporters. It's great, it's what you want to do growing up, to see this crowd. "A few of our guys played in the 2011 World Cup against India, so it was one of the most amazing atmospheres to have played in. So, the guys are really excited to see the colour, hear the noise of the game, and hopefully that kind of gives our guys extra confidence and belief once we get down to it (first match) on Sunday."

(The above story first appeared on LatestLY on Jun 25, 2022 04:41 PM IST. For more news and updates on politics, world, sports, entertainment and lifestyle, log on to our website latestly.com).