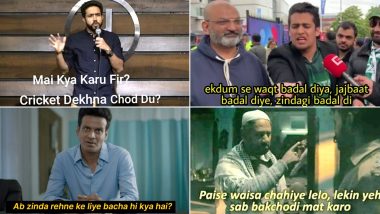 BCCI president Sourav Ganguly, on Wednesday (July 8) announced that Asia Cup 2020, scheduled to be held in September later this year, has been cancelled. Ganguly’s announcement came just a day ahead of the Asian Cricket Council’s (ACC) meeting to decide the fate of the continental tournament. Members of the Pakistan and Bangladesh cricket boards have, however, refused to comment on the matter and have denied their knowledge of any such move by the ACC. But Ganguly’s announcement sent social media into a frenzy with disappointed fans drooling over the cancellation of yet another cricket tournament. Asia Cup 2020 Cancelled Due to Coronavirus Pandemic, Confirms BCCI President Sourav Ganguly.

“Asia Cup cancel ho chuka hai, joh September me tha (Asia Cup, which was scheduled to be held in September, has been cancelled),” Ganguly told journalist Vikrant Gupta in a live Instagram chat. His comments sent social media rolling with many expressing their disappointment after hearing the news of the cancellation. Asia Cup 2020 Not Cancelled, Claims Ehsan Mani; PCB Chief Says 'He is Yet to Hear About it from ACC'.

The Asia Cup 2020 was initially scheduled to be held in Pakistan but was later shifted to United Arab Emirates (UAE) after the Indian cricket team refused to travel citing government security clearance. The tournament was set to be held in the month of September. The news of the cancellation of the Asia Cup further creates an opening for the BCCI to host IPL 2020, which was set to be played in April-May but has been suspended indefinitely due to the coronavirus pandemic.

Cricket Fans After Hearing Asia Cup Has Been Cancelled

#AsiaCup Has been Officially Cancelled"

#AsiaCup crashed in the mid way due to Corona. pic.twitter.com/5txBnzwTG5

#AsiaCup has been Officially Cancelled.

Another window has been cleared for the IPL pic.twitter.com/BSKj1dEtyt

Some Fans to Others...

#AsiaCup cancelled, but IPL will happen

Me to tensed cricket fans: pic.twitter.com/ToR7mIYA6S

Cricket Tournaments and Their Struggles

With the Asia Cup cancelled and the ICC T20 World Cup 2020 unlikely to be held, BCCI now has a gap from September to November to plan and host a full edition of the Indian Premier League.

(The above story first appeared on LatestLY on Jul 08, 2020 10:38 PM IST. For more news and updates on politics, world, sports, entertainment and lifestyle, log on to our website latestly.com).