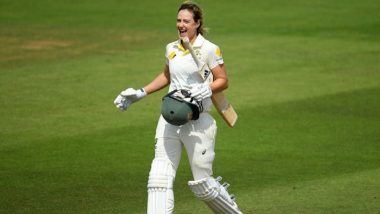 "It's with the greatest of respect for one another that we decided to separate earlier this year," the pair said in a joint statement as per Sydney Morning Herald on Saturday.

"We felt this was the right course of action and is in the best interests of each other and our current lives. This is something that has evolved and is a mutual decision.

"Throughout our relationship we have remained private and we ask that our space and privacy continue to be respected during this difficult time for both of us."

Perry and Toomua got engaged in August 2014 and tied the knot in December 2015.

Speculation started spreading about the couple's relationship in February when Perry arrived at the Australian Cricket Awards in Melbourne, where she won the Belinda Clarke award for the third time, without her wedding ring on.

The award capped off a dominant year for the all rounder in her career which she also won the International Cricket Council's (ICC) Cricketer of the Year award.

Perry was then part of the Australian team that won the Women's T20 World Cup in March, the fifth time they won the trophy.

(The above story first appeared on LatestLY on Jul 26, 2020 04:04 PM IST. For more news and updates on politics, world, sports, entertainment and lifestyle, log on to our website latestly.com).