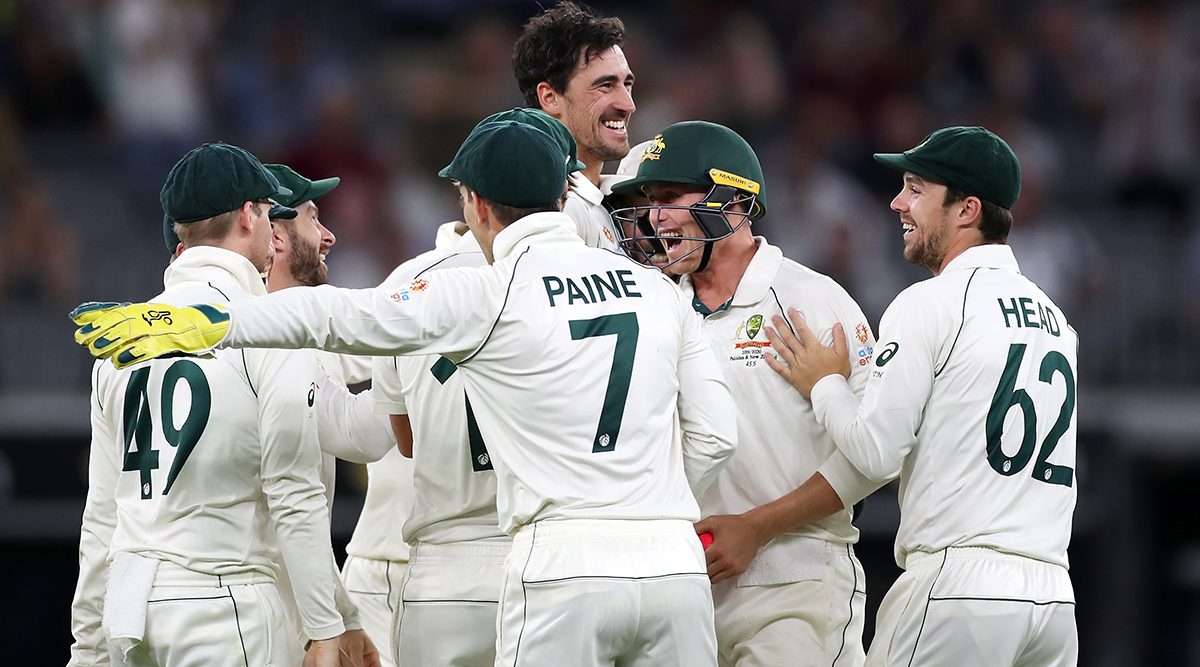 Ross Taylor’s 33rd half-century in fighting conditions kept New Zealand alive but Australia ensured the fight won’t be long by taking 5 wickets in the final session of Day 2 in Australia vs New Zealand 1st Test match. Fans unable to follow Day 1 and 2 of the day-night Test match at Perth can find all live telecast, online live streaming and live score updates for the Test match on this page. Mitchell Starc took 4 Kiwi wickets to almost beat New Zealand out of the match and would hope to complete his 13th five-wicket haul when play commences on Day 3 of the 1st AUS vs NZ Test match. New Zealand were 307 runs behind Australia’s 1st innings score when stumps was called on Day 2 of the 1st AUS vs NZ Test match. Meanwhile, for complete live telecast, online live streaming, score updates and ball-by-ball commentary details for AUS vs NZ 1st Test match, please scroll down.  Australia Vs New Zealand, Live Cricket Score 1st Test Match.

Starc rattled the New Zealand batting order with a four-wicket haul. The left-arm fast bowler, who has now taken at least 4 wickets in the 1st innings of his last three Test matches, first dismissed Tom Latham in the very first over before returning in his second spell to remove New Zealand captain Kane Williamson and break a 75-run partnership after Josh Hazlewood had gate-crashed Jeet Raval to leave the visiting side rattling at 1/2 with both their opening batsmen back in the hut. Henry Nicholls was caught behind, while Neil Wagner lasted one delivery as Starc sniffed a Test hat-trick at hand. But BJ Watling survived the next 4 overs to finish the day with Taylor, who remained not out on 66 runs. David Warner Gets into a Heated Verbal Exchange With Tim Southee During NZ vs AUS 1st Test 2019 Day 1 (Watch Video).

It wasn’t, however, only with the ball that Starc was good at Perth on Day 2 of the day-night Test match. With the bat, the 29-year-old hit a patient 30 and was involved in a 45-run stand with captain and wicket-keeper Tim Paine that frustrated the Kiwis after Marnus Labuschagne’s fine century and Travis Head’s fifty. Australia eventually were bowled out for 416 runs with Tim Southee and Wagner taking 4 wickets each.

Australia vs New Zealand day-night Test match, which is also the 1st match of a three-Test series, is being played at the Perth Stadium. Day 3 of the 1st AUS vs NZ Test match will be played on December 14, 2019 (Saturday). Day 3 is scheduled to start at 10:30 am IST (Indian Standard Time) and 01:00 pm local time.

Australia, powered by Labuschagne’s century, some vital contributions from the rest of the batting order and Starc’s storm with the pink ball, has taken control of the match. The hosts will look to extend their supremacy against the Trans-Tasman rivals to another Test match with a massive victory.