Australia vs Pakistan Day-Night Test 2019: Steve Smith vs Yasir Shah & Other Exciting Mini Battles to Watch Out in Pink-Ball Battle at Adelaide Oval

Pink ball is known to expect to favour the pacers which means one could witness a great display of fast-bowling from either side. The pace troika of Mitchell Starc, Pat Cummins and Josh Hazlewood have the experience of handling the pink cherry and could prove to lethal in the forthcoming encounter too. 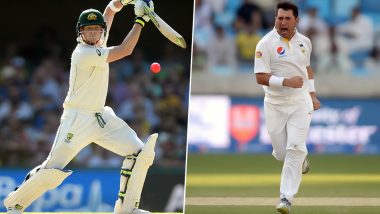 Australia and Pakistan will lock horns in the second and final Test of the series at the Adelaide Oval. It will be a day-night clash which will start on November 29. Aussies are leading the two-match series 1-0 which means a victory in upcoming clash will seal the series for them. On the other hand, Pakistan will expect change of fortunes along with the colour of the ball in order to square up the series. Hosts did win the opening clash by an innings and five runs but some great content between the willow and the cherry were witnessed and below we’ll be focusing on some expected mini-battles from the Adelaide clash.  Australia Vs Pakistan, Cricket Score 2nd Test Match.

Pink ball is known to expect to favour the pacers which means one could witness a great display of fast-bowling from either side. The pace troika of Mitchell Starc, Pat Cummins and Josh Hazlewood have the experience of handling the pink cherry and could prove to lethal in the forthcoming encounter too. However, Pakistani young guns like Shaheen Shah Afridi and Naseem Shah have shown great potential in their early careers and can come good in Adelaide. Talking about the batsmen, David Warner, Marnus Labuschagne and Babar Azam plundered centuries and will now have to tackle the pink-ball challenge. So, as the AUS vs PAK day-night Test gets lined up, let’s look at some mini-battles, the fans can witness. Australia vs Pakistan, 2nd Test 2019, Key Players: David Warner, Babar Azam, Mitchell Starc and Other Cricketers to Watch Out.

The number one ranked Test batsman could manage only four runs in Brisbane and was exasperated from his performance. Leg-spinner Yasir Shah dismissed the batsman and his celebration displayed his delight. However, Smith is roaring to comeback in the field and redeem himself by piling up a huge score. While Shah, who took four wickets in the opening match, will look to get better of the batting stalwart once again.

After a horrific performance in Ashes 2019, Warner made a scintillating comeback in the whites and scored a terrific ton in Brisbane. The southpaw looked at his prime and scored runs all over the park. However, he did face some difficulty while facing Naseem Shah and it’s the pacer only who scalped the opener for 154 runs. With the pink-cherry in hand, Shah might become more lethal and would like to possess an even greater challenge to the left-handed batsman and dismiss him early in the innings.

The left-arm pacer bowled with hostility in the opening clash and took a total of seven wickets in the match. Starc’s fiery deliveries were too hot to handle for most Pakistani batsmen who were dismissed by the speedster. However, one Pakistani batsman who valiantly tackled Starc was Babar Azam who scored a century in the last innings of the match while trying to bring Pakistan back on track. So, a battle between them will also be interesting and let’s see who comes on top.

Australia have won all their previous five day-night Tests and are firm favourites to win the forthcoming encounter too. While Pakistan have participated in three pink-ball Tests do date in which they lost two and won one. So, the Tim Paine-led side do look like the stronger team on paper but the ‘unpredictable’ Pakistan side are known to cause upsets hence, can’t be taken lightly.

(The above story first appeared on LatestLY on Nov 28, 2019 04:26 PM IST. For more news and updates on politics, world, sports, entertainment and lifestyle, log on to our website latestly.com).