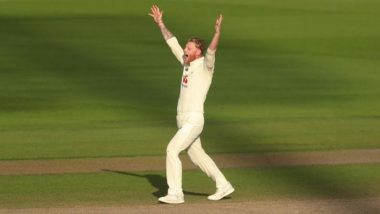 All-rounder Ben Stokes will miss the remaining two Test matches against Pakistan due to family reasons. England and Wales Cricket Board (ECB) in a statement issued confirmed about the all-rounder's unavailability for the upcoming two fixtures against visiting Pakistan side at The Rose Bowl in Southampton. "Stokes will leave the UK later this week and travel to New Zealand. He will miss England's two Test matches against Pakistan at the Ageas Bowl starting on Thursday 13 August and Friday 21 August," ECB said in a statement. Pakistan Can Still Win Test Series Against England Despite Manchester Loss, Says Inzamam-Ul-Haq.

Stokes' father, Gerard James Stokes was seriously ill during England's tour of South Africa and reportedly he has been recovering since then. It is clearly not known why Stokes will travel to New Zealand, but ECB has requested to respect the privacy. "The England and Wales Cricket Board, along with the Stokes family, requests that all media respects the family's privacy at this time," it added.

The all-rounder apparently will have to leave the bio-secure bubble. Meanwhile, ECB have not named Stokes replacement yet. The all-rounder was used as a proper batsman in last Test against West Indies and the series opener against Pakistan.

(The above story first appeared on LatestLY on Aug 09, 2020 06:38 PM IST. For more news and updates on politics, world, sports, entertainment and lifestyle, log on to our website latestly.com).