This is the inaugural edition of the World Test Championship and started on August 1 with England and Australia facing each other in the first game of a five-match Ashes Test series. The Championship features 9 of the 12 Test Playing Nations with new Test entrants Ireland and Afghanistan excluded from the competition. 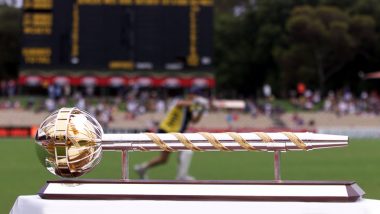 India have qualified for the inaugural ICC World Test Championship (WTC) final after defeating England by an innings and 25 runs in the fourth Test at the Narendra Modi Cricket Stadium in Ahmedabad. With this win, Virat Kohli’s men confirmed their top position in the points table, and they will now face second-placed New Zealand in the summit clash at the iconic Lord’s Cricket Stadium in London, England. Although any official dates are yet to come, the ultimate encounter will get underway on June 18 later this year. As the cycle of WTC 2019-21 comes to an end, please scroll down to check the final team standings. ICC Changes World Test Championship Points System.

This is the inaugural edition of the World Test Championship, which started on August 1 with England and Australia facing each other in the first game of a five-match Ashes Test series. The Championship features 9 of the 12 Test Playing Nations with new Test entrants Ireland and Afghanistan excluded from the competition. Australia, Bangladesh, England, India, New Zealand, Pakistan, South Africa, Sri Lanka and West Indies are the nine teams that will be participating in WTC. The nine teams together will compete in 71 Test matches across 27 series, which will be played over the next two years. Another member Zimbabwe has been suspended due to alleged corruption charges.  ICC World Test Championship Schedule 2019-2021: List of Cricket Matches to Be Played Under WTC.

All nine teams were supposed to play at least one Test series against six of the other eight teams and each series will vary between two and five Test matches. Every team was scheduled to participate in six series each (three at home and three away series) but will not be playing the same number of matches. A side can accumulate a maximum of 120 points from a single bilateral series.  However, they have to now concentrate on the margin as well owing to the new grading system. Top two placed teams at the end of the league stage will contest in the final at Lord’s on June 2021.

As per the previous system, teams wouldn't receive any points for series victories but for Test match results. Points will be equally distributed in every series, regardless of the draws. Teams will, therefore, receive maximum points on winning a Test match, while there will be minimum points on dead rubbers. Points will also vary depending on the length of a series, an ICC statement said. In a five-match series, therefore, 20 percent of the points will be available each match, while in a two-match series, 50 percent of the points will be available.

The World Test Championship is in line with ICC’s goal to have an elite premiership tournament for all three formats of international cricket. It was first proposed by the apex cricket in 2013 as a replacement for the ICC Champions Trophy but met dead ends in 2013 and 2017 before hitting the road this year. The ICC World Test Championship was officially launched on July 29, 2019, following the conclusion of the 2019 Cricket World Cup. The first Test Championship will run from 2019-2021, while the second will take place from July 2021 to June 2023.

(The above story first appeared on LatestLY on Aug 26, 2020 04:41 PM IST. For more news and updates on politics, world, sports, entertainment and lifestyle, log on to our website latestly.com).