The players, who are part of the Australia ODI and T20Is squads, travelled to Sydney to commence their preparation for both the series against India, beginning November 27. As a result of the mass airlift, the likes of Paine, Labuschagne, Wade, Head, and Green bid a quick farewell to their family and friends. 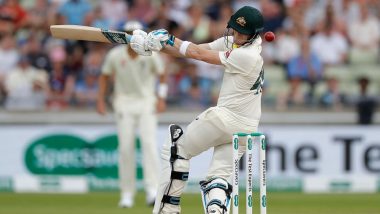 Melbourne, November 17: As an emergent measure, several members of the Australian Test squad were on Tuesday airlifted from South Australia, following a Covid-19 outbreak there, to New South Wales to save a domestic season, which includes a full series against India, from complete disruption due to the pandemic.

The players, airlifted by Cricket Australia (CA) in a charter flight, include Test players Tim Paine, the captain, Marnus Labuschagne, Matthew Wade, and Travis Head, besides those part of Australia 'A' team and those who will compete in the T20 Big Bash League (BBL) starting next month. India Tour of Australia 2020–21 Tentative Schedule Out: Get Fixtures and Venue Details of IND vs AUS T20I, ODI and Test Series.

South Australia had on Sunday announced a new Covid-19 cluster, as the number of cases quickly grew to 17 on Monday. The numbers, however, fell to five on Tuesday.

Following this, the governments of Western Australia, Tasmania, and the Northern Territory announced border closures, with Queensland to impose a two-week hotel quarantine on all visitors from Adelaide from 11.59pm on Monday. Thereafter, CA and BBL clubs moved rapidly to ensure that all players left the affected state.

These moves, according to an ESPNcricinfo report, included a charter flight specifically to transport all players and staff from the Adelaide Strikers to a training camp in Coffs Harbour.

The players, who are part of the Australia ODI and T20Is squads, travelled to Sydney to commence their preparation for both the series against India, beginning November 27. As a result of the mass airlift, the likes of Paine, Labuschagne, Wade, Head, and Green bid a quick farewell to their family and friends.

India and Australia will play three ODIs and three T20Is beginning November 27. The two teams will then compete in a four-Test series for the Border-Gavaskar Trophy, beginning with the day-night Test at the Adelaide Oval from December 17.

"Players and staff from Western Australia, Tasmania, and Queensland who are part of the Australian men's One-day International and Twenty20 International squads are traveling to Sydney today [Tuesday] to commence their preparation for both series. This decision was made after players returning from the Sheffield Shield hub in South Australia after the last round were subject to changes in border conditions by the aforementioned state governments," CA said in a statement.

Nick Hockley, CA's interim CEO, said the steps were taken to ensure the summer schedule would not be compromised by the new border restrictions by the states. India vs Australia 2020-21: Plane Crashes 30km From Indian Cricket Team Hotel in Sydney.

"CA has taken a pro-active approach and mobilised a number of people across the country over the past 24 hours to shore up our men's domestic and international schedules. CA will continue to monitor the situation in South Australia and the resulting border restrictions around the country," he said.

"As ever, we will remain agile in addressing the challenges presented by the pandemic and remain more confident than ever of hosting a safe and successful summer across all formats."

CA said it remains "committed to hosting" the first Test of the Border-Gavaskar Trophy against India in Adelaide. It further said that "none of the players in Adelaide for the Marsh Sheffield Shield visited the "hot spots" identified by SA Health".

"CA has nonetheless instructed all players to undergo Covid-19 tests, with all results received thus far returning negative," it said.

(The above story first appeared on LatestLY on Nov 17, 2020 08:31 PM IST. For more news and updates on politics, world, sports, entertainment and lifestyle, log on to our website latestly.com).