The hosts were on course to scripting an impressive chase after a 150-run unbeaten stand between Joe Root and Jonny Bairstow propelled them to 259/3, 119 runs away from the target. India would need a miracle to claw their way back into this game. 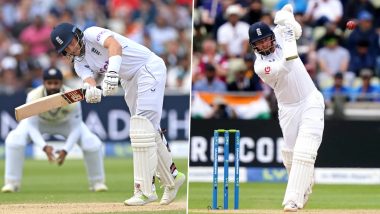 BazBall is here and it's here to stay. And why not? It has become England's new mantra of playing Test cricket, one that has now brought them close to pulling off a record chase in the Edgbaston stadium after day 4 of what has been a pulsating fifth Test. And the architects of this win are Joe Root (76*) and Jonny Bairstow (72*), who have continued their fine form ever since English red-ball cricket has undergone a supposed revolution. The two struck a 150-run stand to ensure that England remain just 117 runs away to win the match and draw the series 2-2. If England, who are currently 259/3 pull this off, it would be their highest-run chase in Test history. What is BazBall? Know All About England’s New Approach to Test Cricket Under Coach Brendon McCullum

Needing 378 to register a win, not many did count England as a favourite to win, especially against this Indian bowling attack. But their openers--Alex Lees (56) and Zak Crawley (46) proved everyone wrong with a 107-run stand that broke when the latter mistakenly left a delivery by Indian captain Jasprit Bumrah that went on to rattle the stumps. Bumrah did get another right after tea when he had Ollie Pope nick behind for a three-ball duck. Furthermore, a run out followed when Root ran out Lees at the non-striker's end. England were panicking and India saw light at the end of the tunnel. But that was it. Post that period, England gradually gained control of the match with Root and Bairstow using all their experience to ensure that they did stutter anymore.

Hanuma Vihari, potentially cost India's golden chance to claw back into this game when he dropped Bairstow's catch in the slips. The right-hander made him pay for the mistake his second fifty-plus score of the game. Root meanwhile got to his 55th Test fifty and looked comfortable in the chase.

Earlier, India were shot out for 245 runs on the board with overnight batters Cheteshwar Pujara and Rishabh Pant scoring half-centuries each. England continued to chip away at the wickets since morning and ensured that not more than 245 was scored by India. Skipper Ben Stokes ended up with an impressive four-wicket haul.

#Jonny Bairstow got to his fifth successive Test fifty

#Rishabh Pant became the second Indian wicketkeeper after Farokh Engineer to score a hundred and fifty in the same Test match.

#He also became the first Indian to achieve this feat away from home,

#Pant has the most runs by an Indian wicketkeeper in an away Test match.

With England just 119 runs away from an impressive win, India need miracles early on Day 5 to reignite hopes of a comeback in this game.

(The above story first appeared on LatestLY on Jul 04, 2022 11:59 PM IST. For more news and updates on politics, world, sports, entertainment and lifestyle, log on to our website latestly.com).