What is BazBall? Know All About England’s New Approach to Test Cricket Under Coach Brendon McCullum

The term is taken from Brendon McCullum, the new England Test head coach's name. It implies England's fresh, aggressive and confident approach to playing Test cricket, much like how the former New Zealand played during his cricketing career. 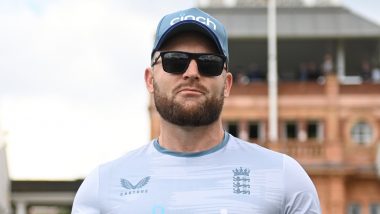 BazBall, a term that is slowly making its way into the annals of English cricket, has been heard for some time now. Commentators speak about it, people buzz about it on social media and well, England's recent approach to playing Test cricket is a perfect testament to what it stands for. So what does this term mean? Joe Root, Jonny Bairstow Take England Close To Record Chase As India End Day 4 on Backfoot

This term, obviously, is taken from Brendon McCullum's nickname, 'Baz.' England cricket, in the red-ball format was staring down at the barrel and the worst of all was the Ashes defeat last year. Having hit rock bottom, England cricket needed to come up with innovation and usher in a fresh change. The appointments of Brendon McCullum as Test head coach and Ben Stokes as skipper in the red-ball format was an example of starting things anew.  Ever since 'Baz' took over as England Test team's head coach, there has been a fresh approach to the side's Test cricket playing ways.

Much like how he was in his playing days, the English team now have a fearless and bold approach to Test cricket, attacking right from the get-go. One can argue that this is in stark contrast to the good old-fashioned Test cricket playing style but if it's reaping rewards for England, then let this be the new direction.  England batters seem to be more confident nowadays than how they did, a year ago.

Now, no total is safe whenever England is competing, especially chasing. When Ben Stokes said at the toss ahead of the fifth Test against India, that his side 'loves chasing,' he surely meant business. And England are well and truly on their way to pulling off a massive chase against India, something very few could have thought of. That's exactly what BazBall means.

Yes, this new approach has its negatives as well. There might be collapses occurring frequently but that's part of the process. But such things are unlikely to happen with England, especially since they have so many top-quality players stacked in into one team and most of who, appear to be in form. Even in the recent Test against India, they are making a cakewalk of a 378-run chase, something that was expected to be a tough task.

One thing's for sure. BazBall is going to make sure that England break many many more Test records, especially with the bat.

(The above story first appeared on LatestLY on Jul 04, 2022 11:20 PM IST. For more news and updates on politics, world, sports, entertainment and lifestyle, log on to our website latestly.com).