On May 04, BCCI held an emergency meeting and decided to postpone the IPL 2021 till further notice. Now the remaining 31 suspended matches are planned to be conducted in UAE from 19th September with the final to be played on 15th October. 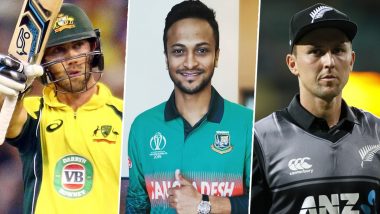 Indian Premier League (IPL) 2021 season, which was caught in a bind due to the second wave of COVID-19 in the country, is now set to resume. On May 04, BCCI held an emergency meeting and decided to postpone the IPL 2021 till further notice. Now the remaining 31 suspended matches are planned to be conducted in UAE from 19th September with the final to be played on 15th October. But here, bad news also travels with the good news i.e., fans are likely to miss star overseas players in the remainder of IPL 2021.

This would be the biggest concern for franchises, especially the ones dependent hugely on their foreign players like Rajasthan Royals and Sunrisers Hyderabad. Players from England, Australia, New Zealand and Bangladesh are likely to miss the remainder of IPL 2021 UAE League.  Shakib Al Hasan Loses his Cool, Kicks Stumps; Argues With Umpire During Mohammedan Sporting Club vs Abahani Limited DPL T20 Cricket League 2021 (Watch Viral Videos)

England and Wales Cricket Board (ECB) on May 29 announced that it won't allow its players to play in the second phase of IPL because of the upcoming limited-overs series with Bangladesh and then giving them proper break so as to keep them ready for the upcoming T20 World Cup and Ashes.

Rajasthan Royals seem to be highly affected with this as, with the unavailability of Jos Buttler, Jofra Archer, Ben Stokes and Mustafizur Rahman, they will be left with just two overseas players.

The case with Australian players is different as, according to Australia Skipper Aaron Finch, Cricket Australia might allow some players to play for their respective franchises and for some it won’t, it all depends on a case-to-case basis.  Star Pacer and Australia vice-captain Pat Cummins has already pulled out from the second phase of IPL, KKR confirmed to media.

New Zealand captain and star pace bowler, Kane Williamson and Trent Boult are also set to miss 31 remaining matches of IPL 2021 UAE league. This will be a huge jolt for their respective franchises; Sunrisers Hyderabad and Mumbai Indians.

Sunrisers Hyderabad changed its skipper in mid of the tournament, Kane Williamson took over captaincy from David Warner but probably both the players might not play for the remainder of the IPL. Hence, the question to lead the side remains with the franchise.

Unfortunately, Fans will miss the star overseas players in the remainder of the IPL but they might witness the rise of some lesser-known overseas players as this will be the best opportunity for them to showcase their talent in the absence of some star players.

(The above story first appeared on LatestLY on Jun 13, 2021 12:01 PM IST. For more news and updates on politics, world, sports, entertainment and lifestyle, log on to our website latestly.com).