Mohammed Shami On Hat-Trick, Gets Rid of Mushfiqur Rahim and Mehidy Hasan During India vs Bangladesh 1st Test 2019

Mushfiqur Rahim scored half-century during India vs Bangladesh 1st Test 2019. India is playing against Bangladesh in the 1st Test of Ganguly-Durjoy Trophy 2019. The two-match Test series has begun from November 14, 2019, and it is being held at Holkar Cricket Stadium in Indore. 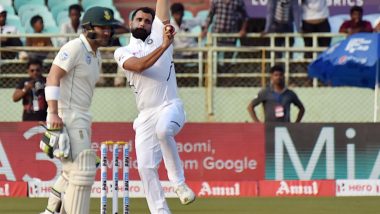 Mohammed Shami is on a hat-trick in India vs Bangladesh 1st Test 2019, however, fans will have to wait for the Tea-Break to get over to know whether he will pick hat-trick or not. India is playing against Bangladesh in the 1st Test of Ganguly-Durjoy Trophy 2019. The two-match Test series has begun from November 14, 2019, and it is being held at Holkar Cricket Stadium in Indore. Bangladesh however, is not in that strong position as they have already lost four wickets. Mushfiqur Rahim got dismissed on 43 runs by Shami and on the very next ball of his last over, he took the wicket of Mehidy Hasan. Bangladesh now has a score of 140/7. Liton Das is currently batting on the crease and he will be joined by Taijul Islam after completion of Tea Break.   India Vs Bangladesh, Live Cricket Score 1st Test Match.

Earlier Bangladesh skipper Mominul Haque won the toss and elected to bat first. The visitor did not get a good start to their inning as they lost early wickets. Bangladesh lost their first three wickets in the morning session where Umesh Yadav, Ishant Sharma and Mohammed Shami bagged a wicket each. The Indian pacers indeed utilise good condition of the pitch early in the morning with the new ball.

Bangladesh seems to accelerate their inning when Mushfiqur Rahim and Mominul Haque were batting well and took the score till 100 runs. However, Ravichandran Ashwin provided a key break when he dismissed Mominul Haque by getting him bowled. The Bangladesh Cricket Team skipper Haque scored 37 runs from 80 balls.

It must also be mentioned that Mushfiqur Rahim got a fair amount of luck in this game, as he was dropped by Virat Kohli on Umesh Yadav's delivery. Rahim was also dropped multiple times by Ajinkya Rahane on Ravichandran Ashwin's bowling, however, the vice-captain had tough chances. Even Wriddhiman Saha was unable to catch him behind on Ashwin's delivery as the ball after passing through inside edge hit wicket-keeper's thigh. India will look forward to continuing their dominance in ICC World Test Championship 2019-21 by defeating Bangladesh side.

(The above story first appeared on LatestLY on Nov 14, 2019 02:21 PM IST. For more news and updates on politics, world, sports, entertainment and lifestyle, log on to our website latestly.com).