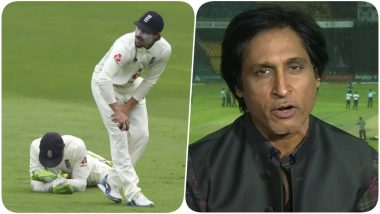 On the day one of the second Test match between England and Pakistan, Abid Ali had been dropped by the fielders on a couple of occasions. He was once dropped by Dominic Sibley who put down a straight forward catch at third slip and on the second time, it was Rory Burns who did the blunder. Needless to say, the fans pointed out the sloppy fielding and even Ramiz Raja joined the bandwagon and he went on to troll England. He snapped at the hosts and said that they were maintaining social distancing from the ball. Pakistan vs England Live Score of 2nd Test Day 1.

On the first occasion, it was Stuart Broad who was handling the bowling duties and the Pakistani players went on to drive that one. The ball flew to Sibley's left and got past his fingers. Chris Woakes was the bowler who was handling his bowling duties on the second time and Rory Burns messed up a simple catch. Now Ramiz Raja joined the bandwagon of trolls and pointed out the sloppy fielding by the hosts on social media. Check out his tweet below:

England maintaining social distancing from the ball in the slips!

Talking about the current situation of the match, the Men in Green have lost a couple of wickets already. Shan Masood was the first man to depart early. Now just a while ago, James Anderson snapped the second wicket in the form of Azhar Ali who made way to the pavilion on the score of 20. Babar Azam is the new man in and the rain has halted the match.

(The above story first appeared on LatestLY on Aug 13, 2020 07:17 PM IST. For more news and updates on politics, world, sports, entertainment and lifestyle, log on to our website latestly.com).