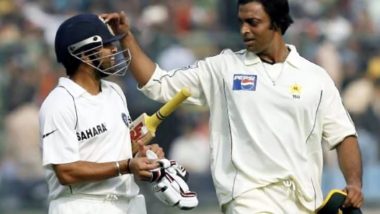 Former Indian batting sensation is arguably the best batsman to have ever graced the game and his record in international cricket speaks volumes of his prowess. Hailed as the 'God of Cricket,' the right-handed batsman tormented many potent bowling line-ups in his illustrious career and proved his mettle on all sorts of tracks. Recently, however, former Pakistan pacer Mohammad Asif, who faced a seven-year ban in 2011, claimed that the Master Blaster closed his eyes while facing speedster Shoaib Akhtar during the 2006 Karachi Test match between India and Pakistan. Brian Lara’s Son Reminds Sachin Tendulkar of His Childhood Days, Here's Why! (View Post).

Recalling the encounter, Asif revealed that Pakistan were on the back foot after left-arm pacer Irfan Pathan claimed a hat-trick in the first over of the mach. However, during the 2nd innings of the game, Akhtar delivered a fiery spell and Asif said that he clearly saw the Master Blaster closing his eyes while facing a bouncer from Akhtar.

“When the match started, Irfan Pathan claimed a hat-trick in the first over itself. Our morale was down. Kamran Akmal scored a century lower down the order. We scored around 240 runs. “When we started bowling, Shoaib Akhtar bowled at express pace in that match. I was standing at square leg near the umpire and I myself saw that Tendulkar closed his eyes while facing one or two bouncers bowled by Shoaib,” said Asif while featuring in the Burgerz show.

After getting bundled out for 245 runs while batting first, Younis Khan and Co made a brilliant comeback as they bowled India out for 238 runs in the second innings before piling up a massive score of 599/7. India eventually lost the game by 341 runs.

“The Indians were playing on the back foot and we didn’t allow them to score even 240 in the first innings. We snatched victory from jaws of defeat,” the right added further. Interestingly, it was Asif only who dismissed Tendulkar in that game. He claimed seven wickets in total and played a crucial role in guiding the home side over the line.

(The above story first appeared on LatestLY on May 27, 2020 09:58 PM IST. For more news and updates on politics, world, sports, entertainment and lifestyle, log on to our website latestly.com).