This Day, That Year: When Chennai Super Kings Defeated Mumbai Indians in a Last-Over Thriller of IPL 2018 Season Opener

The MS Dhoni-led CSK were making a comeback in the T20 extravaganza after serving two years ban. Also, they were up against the defending champions and thus, Rohit Sharma and Co stepped into the encounter as favourites. However, a limping Kedar Jadhav smashed two boundaries in the last over to guide CSK to a one-wicket triumph. 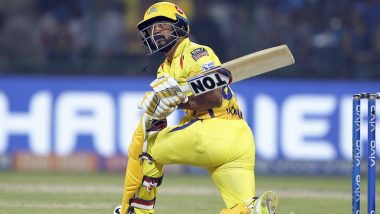 Amid the COVID-19 pandemic, the fate of Indian Premier League (IPL) might be under the dark clouds. However, in this meantime, we can look back at some of the best encounters which were played in the history of the game. Here, in this article, we’ll revisit the 2018 IPL season opener between Mumbai Indians (MI) and Chennai Super Kings (CSK) which was played on exact this day (April 7). The MS Dhoni-led CSK were making a comeback in the T20 extravaganza after serving two years ban. Also, they were up against the defending champions and thus, Rohit Sharma and Co stepped into the encounter as favourites. This Day, That Year: When Mumbai Indians’ Alzarri Joseph & Kieron Pollard Tamed Kane Williamson & Men During SRH VS MI (Watch Video).

After winning the toss at the Wankhede Stadium in Mumbai, the Men in Yellow opted to bowl. The decision seemed spot-on as both the openers Rohit Sharma and Evin Lewis were dismissed inside four overs. However, crucial 40 plus scores from Suryakumar Yadav and Ishan Kishan along with some end-over blitzes from Krunal Pandya helped Mumbai post 165 runs.

Chasing the target, the CSK side kept losing wickets at regular intervals and Mumbai were comfortably placed on the driver’s seat. Debutant leg-spinner Mayank Markande took four crucial wickets in the middle overs including that of skipper Dhoni. Also, Kedar Jadhav got retired hurt which increased his side’s misery. At one point, CSK were reduced to 118/8 and the result of the match seemed a mere formality.

However, Dwayne Bravo unleashed his onslaught and turned the tables around. He smashed fours and sixes to spice up the encounter. He, in fact, smashed Jasprit Bumrah for three maximums in the penultimate over. However, he got out in the last delivery of the 19th over with CSK needing 7 runs of the last over.

A limping Kedar Jadhav came into the wicket and didn’t seem like scoring runs with ease. Batting against Mustafizur Rehman, he wasn’t able to gather even one run in the first three deliveries. However, he scooped the fourth ball for six before gathering boundary in the fifth ball to guide his to a one-wicket triumph. Bravo was adjudged Man of the Match for scoring 68 runs off 30 balls.

(The above story first appeared on LatestLY on Apr 07, 2020 08:36 PM IST. For more news and updates on politics, world, sports, entertainment and lifestyle, log on to our website latestly.com).