Virat Kohli and Co. Enjoy Some Fun Time On The Cruise After Winning First Test Against West Indies in Antigua (View Pictures) 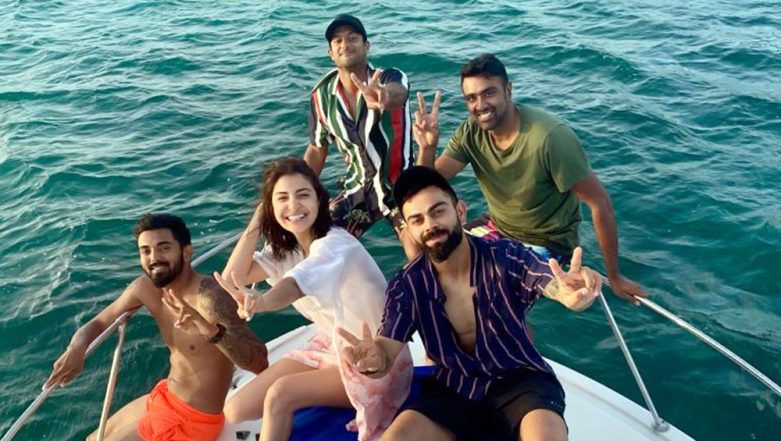 Virat Kohli and Co. Chilling after win in the first test

New Delhi, August 27: After registering a record-breaking win in the first Test against West Indies, Team India members took some time off and went on a cruise on the high sea around the Caribbean Islands. Opening batsman K.L. Rahul on Tuesday shared a picture on social media in which he can be seen enjoying along with skipper Virat Kohli, Mayank Agarwal and Ravichandran Ashwin. Kohli's wife Anushka Sharma was also posing in the picture captioned "Endless blues". Is KL Rahul Dating Alia Bhatt's Friend Akansha Ranjan Kapoor or Athiya Shetty? The Cricketer Answers.

Ashwin also shared the same picture with a caption: "Seaside+sunset+good company."Meanwhile, left-arm chinaman Kuldeep Yadav also shared a picture on Instagram where he can be seen riding a jet ski alongside all-rounder Ravindra Jadeja at Jolly Harbour in Antigua. "Out and about in beautiful Antigua," he captioned the image. India vs West Indies 1st Test: Indian Opener KL Rahul Disappointed After Scoring Only 38 Runs.

Seaside plus sunset is a deadly combination👌 pic.twitter.com/u7YpSQR9db

Out and about in beautiful #Antigua 🌴🌊 @royalnavghan

India, ranked No. 1 in Tests, kicked off their World Test Championship campaign in an emphatic manner by winning the first match by 318 runs in Antigua. The second Test will begin on August 30 in Jamaica.