Virat Kohli and Rohit Sharma have always debated about who between the two is the better captain. Rohit Sharma not only won the IPL titles under his captaincy but also won the Asia Cup 2018 for India. With Kohli missing a few matches in 2018-19, the debate further heated up. Both have a fair share of their successes and have often debated on the split captaincy. 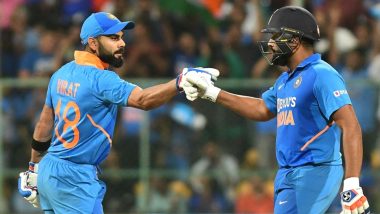 He pointed out the fact that Virat Kohli is the number one batsmen when he handles the reins of the country. “I don't agree with it (having different captains in different formats). Virat loves captaincy and captaincy brings best out of Virat. His performances haven't dropped because of captaincy. And when our captain is number 1 batsman in all formats......what's the problem? He has been coming up world-class performances across formats. His strategy is working well in all formats,” Prasad told India News.

Prasad also went on to speak about MS Dhoni’s future in the national team and said that he is very clear about his future and will be seen in the IPL for Chennai Super Kings. It is only after he plays in the IPL 2020 will he take a decision regarding his career. MS Dhoni was last seen in the Indian colours during the ICC Cricket World Cup 2019.

(The above story first appeared on LatestLY on Mar 18, 2020 11:03 PM IST. For more news and updates on politics, world, sports, entertainment and lifestyle, log on to our website latestly.com).