Yuvraj Singh, Shubman Gill Sweat Out in Gym Together As ‘Thugs of Punjab’ Get Ready for the Season (Watch Video) 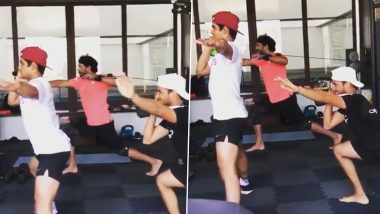 Cricket activities in India might be on a halt amid the COVID-19 pandemic. However, many prominent players are leaving no stones unturned to be in shape. Recently, former Indian all-rounder Yuvraj Singh took to Instagram and shared a video from his workout session with Shubman Gill and Abhishek Sharma. Well, the two-time World Cup winner might have bid adieu to international cricket. However, it seems like he still wants to showcase some more of his blitzes and that’s evident in his caption. “Thugs of punjab are getting ready for the season ! @shubmangill @abhisheksharma_4 @sagardiwanfw,” wrote Yuvraj while sharing the video on the picture-sharing website. On This Day: Mohammad Kaif, Yuvraj Singh Script Historic NatWest Trophy Win.

Just like Yuvraj, Gill and Abhishek also represent Punjab in domestic cricket and the trio is gearing up for their next assignment. Both Gill and Abhishek were the part of the Indian squad that lifted the Under-19 World Cup in 2018. The latter has done reasonably well in domestic cricket while Gill has taken giant strides. The right-handed batsman has been one of the most prolific run-scorers in domestic cricket in recent times and has also been the part of Indian squad on many occasions. Meanwhile, let’s look at the workout video share by Yuvraj Singh. Shubman Gill Recalls Being Sledged by Hardik Pandya.

Speaking of cricket action, BCCI President Sourav Ganguly has made it crystal clear that the national team’s practice session will not be resumed before August. However, the apex cricket body is planning to host the 2020 edition of the Indian Premier League (IPL) in September-October. Nevertheless, they have to wait for the official confirmation of International Cricket Council (ICC) regarding the postponement of T20 World Cup.

(The above story first appeared on LatestLY on Jul 16, 2020 06:17 PM IST. For more news and updates on politics, world, sports, entertainment and lifestyle, log on to our website latestly.com).