Chelsea vs Manchester United match in Premier League 2021-22 will be played at the Stamford Bridge. The game will be held on November 28, 2021 (Sunday) and the match is scheduled to begin at 10:00 pm IST (Indian Standard Time). 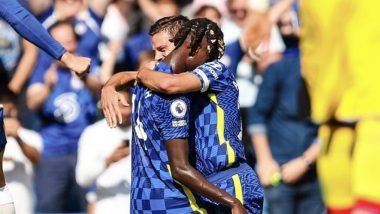 Manchester United have been all over the news recently due to sacking of manager Ole Gunnar Solskjaer following a dismal defeat at the hands of Watford in the league last week. There have been reports of signing of Ralf Rangnick till the end of the season but he will not be in charge when the team faces league leaders Chelsea this evening. The Red Devils have slumped to 9th in the points table with four defeats in their last five league games and things could turn ugly against Chelsea. With West Ham United in action against Manchester City, a win for United though could see them bridge the gap in the top four race. Opponents Chelsea though are fresh after destroying Juventus in the Champions League and one of the in form teams in the continent at present.  Premier League 2021-22: Liverpool Beat Southampton 4-0, Move to Second Spot.

Ben Chilwell’s ACL injury rules him out for at least two months while N’Golo Kante is a major doubt for the contest. Romelu Lukaku is inching closer to match fitness and could be involved against his former team. Ruben Loftus-Cheek and Jorginho should make the midfield pairing with Reece James and Marcos Alonso as the wing backs. Timo Werner could also be slotted in the starting eleven with Mason Mount and Callum Hudson-Odoi for company in the final third.

Alex Telles is set to start as left-back for Manchester United in place of Luke Shaw who is suffering from concussion. Harry Maguire is suspended following his dismissal at Watford and Eric Bailly should partner Victor Lindelof at the heart of defence. Bruno Fernandes is set to be back as the no 10 with Donny Van de Beek partnering Scott Mctominay in midfield. Cristiano Ronaldo, Jadon Sancho, Harry Maguire & Others Prepare for Chelsea vs Manchester United, EPL 2021-22 Match (See Pics).

Chelsea vs Manchester United match in Premier League 2021-22 will be played at the Stamford Bridge. The game will be held on November 28, 2021 (Sunday) and the match is scheduled to begin at 10:00 pm IST (Indian Standard Time).

Where to Get Live Telecast of Chelsea vs Manchester United, Premier League 2021-22 Football Match?

Fans in India can watch the Chelsea vs Manchester United match live on Star Sports channels since Star Network is the official broadcaster for the Premier League 2020-21 in India. Fans can tune into Star Sports Select SD/HD channels to live telecast the clash.

How to Get Free Live Streaming of Chelsea vs Manchester United, Premier League 2021-22 Football Match?

The game will also be available online for live streaming. As Star Network is the official broadcaster for Premier League in India, fans can watch the live streaming of the Chelsea vs Manchester United match on Disney+Hotstar. Chelsea could tear apart Manchester United with the kind of form they are in and it should be a routine win for the Blues.

(The above story first appeared on LatestLY on Nov 28, 2021 02:28 PM IST. For more news and updates on politics, world, sports, entertainment and lifestyle, log on to our website latestly.com).