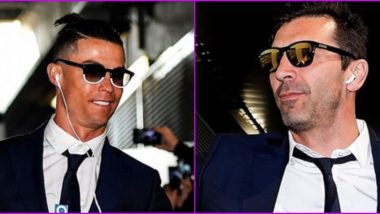 Fresh from their impressive win over Lecce in Serie A 2019-20 encounter, Juventus took to Instagram and wished their fans on the occasion of Sunglasses Day 2020. Juventus defeated 10-man Lecce 4-0 to stay seven points ahead of Lazio on the Serie A 2019-20 points table. Meanwhile, Juventus took to Instagram and shared pictures of Cristiano Ronaldo and goalkeeper Gianluigi Buffon flaunting their sunglasses. “Happy #SunglassesDay, Bianconeri!” wrote Juventus in the caption. National Sunglasses Day 2020: From World’s Most Expensive to Tom Cruise and Ray-Ban Connection, Here’re 11 Cool Facts About Sunglasses.

For the uninitiated National Sunglasses Day is celebrated every year on June 27 in the United States of America (USA). This day is observed to raise awareness about the importance of wearing sunglasses when outdoors as they protect our eyes from harmful ultraviolet (UV) rays of the sun. Cristiano Ronaldo Poses in a Colourful Attire Following Juventus' 4–0 Victory Against Leece in Serie A 2019–20 (See Instagram Post).

As far as Juventus’ Serie A 2019-20 campaign is concerned, the club following the resumption of the league since coronavirus lockdown defeated Bologna 2-0 in their first game. And now handed a 4-0 pasting to Lecce with all goals coming in the second half. Paulo Dybala, Ronaldo (penalty), Gonzalo Higuain and Matthijs de Ligt were the scorers for Juventus. Bianconeri will now take on Genoa on July 01 (as per Indian Standard Time) in the Serie A.

(The above story first appeared on LatestLY on Jun 27, 2020 10:29 PM IST. For more news and updates on politics, world, sports, entertainment and lifestyle, log on to our website latestly.com).