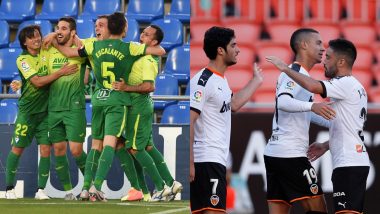 Eibar vs Valencia, La Liga 2019-20 Online Live Streaming and Live Telecast in IST: Valencia will travel to Eibar knowing anything less than a win against Jose Luis’ men will all but crush their hopes for Champions League football next season. Albert Celades’ side recorded their first win in four months with a 2-0 home victory over Osasuna and will hope for a similar result against Eibar, who are winless in their last five games. In those five matches, Eibar have lost thrice and draws their previous two. They are winless since February 29 when they beat Levante 3-0.

A similar run for Valencia, they were in winless since February and had drawn and lost two each in their last four, came to an end this Sunday when Goncalo Guedes and Rodrigo scored to hand them a 2-0 comfortable win against Levante.

The poor run of games have also seen Valencia drop from possible Champions League contenders to eighth in the La Liga points table and seven points off the fourth place. Eibar have dropped to 17th and are only three clear of the relegation zone with 29 points after 30 matches.

Eibar vs Valencia match in La Liga 2019-20 will be played at the Ipurua Municipal Stadium. The match will take place on June 25, 2020 (Thursday) and has a scheduled start time of 11:00 pm IST (Indian Standard Time).

How to Watch Live Telecast of Eibar vs Valencia, La Liga 2019-20 Football Match?

Unfortunately, the Eibar vs Valencia match will not be telecast live as there are no official broadcasters available for La Liga in India.

Where to Get Free Live Streaming Online of Eibar vs Valencia, La Liga 2019-20 Football Match?

Fans, however, can catch the live action on online platforms. The official Facebook page of La Liga will be live streaming the game for fans in India. So fans can watch the Eibar vs Valencia match live on Facebook.

(The above story first appeared on LatestLY on Jun 25, 2020 07:25 PM IST. For more news and updates on politics, world, sports, entertainment and lifestyle, log on to our website latestly.com).