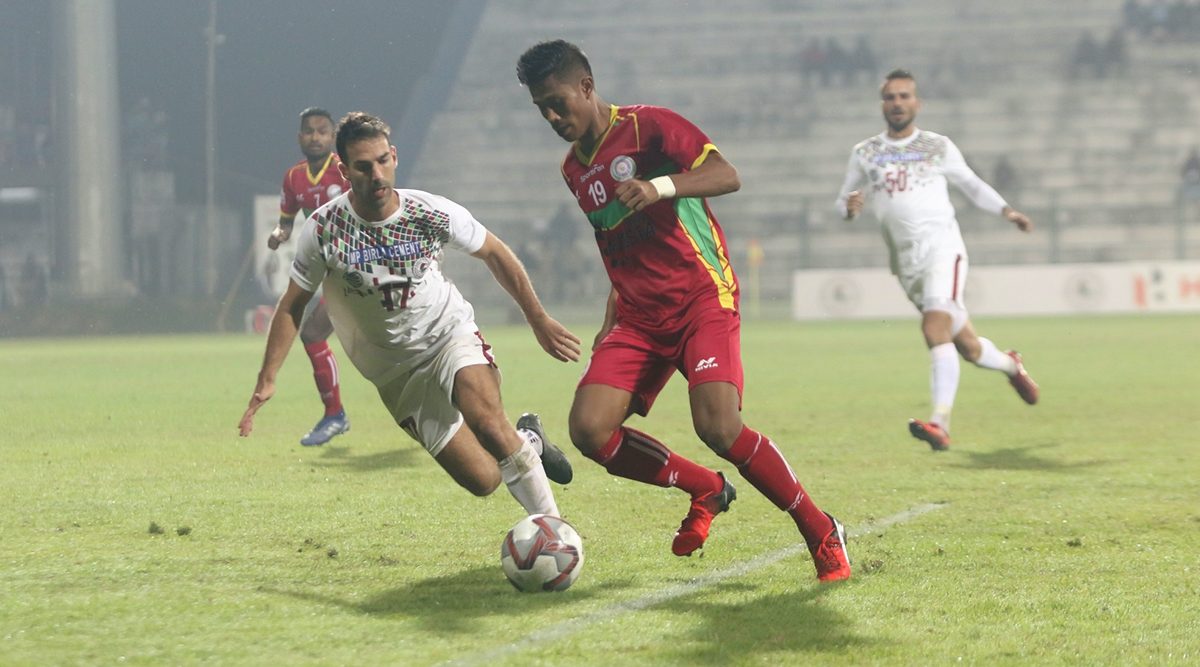 Kalyani, December 16: Kolkata giants Mohun Bagan dished out an impressive display to end Gokulam Keralas winning run in I-League, as the hosts emerged victorious 2-1 in a pulsating match at the Kalyani Municipality Stadium on Monday. Fran Gonzalez converted a penalty in the 24th minute to put the hosts in front before Marcus Joseph cancelled out from the 12-yard penalty spot in the added time of the first half. After the breather, Fran Gonzalez restored Bagan's lead with a towering header in the 48th minute, which turned out to be the eventual winner. I-League 2019–20 Result: Punjab FC Register 1–0 Win Over Indian Arrows.

The deadlock was broken in the 24th minute when Gokulam keeper Ubaid CK brought down Ashutosh Mehra inside the box and referee Crystal John pointed to the spot to award a penalty to Mohun Bagan. Fran Gonzalez stepped up and made no mistake in converting the spot-kick to give his side an early lead. I-League 2019–20: Aizawl FC Gear Up to Host Chennai City in 1st Home Match Under Lights at Rajiv Gandhi Stadium.

Mohun Bagan seemed to be heading into halftime with their noses in front, but the southerners had other ideas. In the third minute of first-half stoppage time, Julen Colinas brought down Nathaniel Garcia inside the box, which prompted the referee to point to the spot again, awarding a penalty to the visitors this time. Marcus Joseph stepped up and the skipper converted with fine aplomb to put his side level, heading into the break.

The second half resumed with Mohun Bagan coming out all guns blazing. The hosts kept piling on the pressure in the Gokulam final third. In the 48th minute, Fran Gonzalez soared the highest to head home a corner, to net his second of the game and more importantly, restore Bagan's lead.

Gokulam Kerala showed great character, constantly running down and stringing moves together and not allowing a moment's reprise to the Bagan backline. In the 65th minute, Henry Kisekka, who had a quiet game until now, delivered a low cross down the right flank, which was tipped clear by Bagan keeper Sankar Roy, but the ricochet fell to Mohammed Salah, who unlike his Egyptian namesake, failed to keep his composure and fired wide.

Fernando Varela's men refused to give up the chase, showcasing why they have been the team to beat so far. In the 88th minute, a Haroon Amiri attempt on goal was spilt by Sankar Roy, with Kisekka picking up the pieces and tapping the ball into an empty net. However, the goal was disallowed by the referee for an apparent foul on the goalkeeper.

With four minutes added on, Marcus Joseph had another crack on goal in the first minute of stoppage time but his thunderbolt of an attempt was tipped over and onto the crossbar by Sankar Roy, as Mohun Bagan held on for the three points, subjecting Gokulam Kerala to their first defeat of the season. The victory for Mohun Bagan ended on a sour note when skipper Gurjinder Kumar was given marching orders in the final minute of stoppage time, rendering him unavailable for their all-important next game.

The result sees Gokulam drop to the fifth spot in the I-League table, whereas Mohun Bagan move to second, one point adrift arch-rivals East Bengal, who they play next in the Kolkata Derby on December 22.