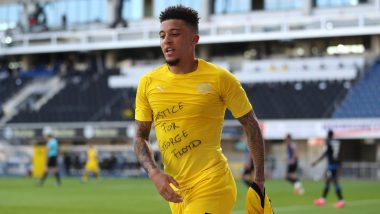 Dortmund, August 4: Manchester United are close to landing England winger Jadon Sancho from Borussia Dortmund in a five-year deal, according to media reports in Germany. Sancho, who left Manchester City to join Dortmund in 2017, is set to link-up with his former team's cross-town rivals in a multi-million pound deal.

According to German outlet BILD, the two clubs are in advanced talks regarding Sancho's transfer and a fee in the region of 108 million pounds is being reported. Dortmund is set for a huge profit considering they acquired his services for just 8 million pounds from City.

This amount will make him the most expensive player in the history of the club. Currently, Paul Pogba tops the chart after United parted ways with 89 million pounds to bring him back to the club from Juventus in 2016. Jadon Sancho to Manchester United Transfer News Update: Phil Neville Says Borussia Dortmund Winger is Capable of Following Cristiano Ronaldo & David Beckham.

It is also being reported that Sancho will be earning in excess of 300,000 pounds per week, which will make him one of the highest earners not just at Old Trafford but also in the Premier League.

Sancho, despite being just 20, caught the eye of top European clubs because of his consistent performances for Dortmund. He scored 20 goals and assisted 19 times across competitions this season and also played a pivotal role in the team finishing second on the Bundesliga table.

(The above story first appeared on LatestLY on Aug 04, 2020 08:15 PM IST. For more news and updates on politics, world, sports, entertainment and lifestyle, log on to our website latestly.com).