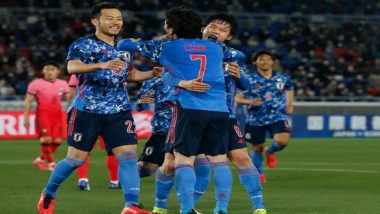 "What the hell" was my expression when I came across the scoreline of Mongolia vs Japan in the World Cup Qualifiers 2020. Japan had battered their opponent black and blue at the Fuku-Ari and won the match 14-0. With this, Japan has now registered their biggest ever win in World Cup Qualifiers. The team had not played a qualifier since November 2019 owing to the COVID-19 pandemic but their game had a different story to narrate. Talking about the match, Japan looked to dominate the opponent from the start of the game. Takumi Minamino gave the Blue Samurai a lead in the 13th minute of the match. Japan Football Fans Clean Stadium Even After Their Team Lose to Belgium in 2018 FIFA World Cup, Win Hearts on Twitter.

Yuya Osako netted a hat-trick and netted his first goal at the 26th minute and three minutes later Daichi Kamada put the team to 3-0. An own goal by Khash-Erdene Tuyaa put the team on 4-0. Sho Inagaki scored on his debut. Junya Ito scored a brace and then the team was cruising towards a win. Kyogo Furuhashi also scored a couple of goals. Takumo Asanso and Yauka Osako also scored a goal.

The netizens also could not believe that the game would turn out to be such a one-sided encounter. Japan took 34 shots out of which 25 ended up being on target. The team has 80 per cent of possession and the rest 20 was held by the home team. Japan had a passing accuracy of 89 per cent whereas, Mongolia had 47 per cent passing accuracy. The game undoubtedly turned out to be quite an unbelievable one. The team has won all five qualifying game in WC Qualifier 2022. They had also qualified in the last FIFA World Cup 2018.

(The above story first appeared on LatestLY on Mar 30, 2021 10:51 PM IST. For more news and updates on politics, world, sports, entertainment and lifestyle, log on to our website latestly.com).