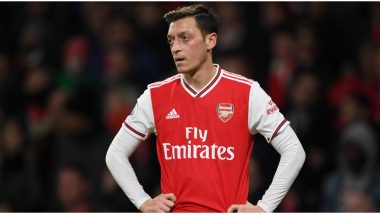 Mesut Ozil was the target of trolls for his high wages after Arsenal announced they are set to make 55 club staff redundant due to the COVID-19 crisis. The club, in a statement, said that they were letting go of 55 staff members to tackle the economic crisis caused by the pandemic. It also said that the decision was taken keeping the club’s best interests in mind and that is was the only way forward. Supports of the club and many Gunners fans immediately lashed back at Arsenal’s multi-billionaire owner Stan Kroenke for such heartless decision amid the pandemic. Some also targeted Ozil for refusing to take a pay cut. Willian Transfer News: Arsenal Most Likely Destination for Chelsea Midfielder, Say Reports.

Former German international, Ozil, who moved to Arsenal from Real Madrid in 2013, earns £350,000 per week in wages and is the club’s highest-paid player. Ozil had earlier refused to take a pay-cut amid the pandemic despite most of his teammates agreeing to the deduction to help the club function. Ozil was asked by club to take a 12.5% pay-cut to annual salary at the end of April but had refused. Manchester United Transfer News Update: Red Devils Identify Second Summer Target After Jadon Sancho.

An update from your club.

Arsenal, on Wednesday, put out a statement on its website declaring that they will sack 55 staff members to reduce the costs that will help in ensuring the cub continuous to function in a sustainable and responsible manner. "Our aim has been to protect the jobs and base salaries of our people for as long as we possibly can. Unfortunately, we have now come to the point where we are proposing 55 redundancies.

"We do not make these proposals lightly and have looked at every aspect of the club and our expenditure before reaching this point. We are now entering the required 30-day consultation period on these proposals. We know this is upsetting and difficult for our dedicated staff and our focus is on managing this as sensitively as possible,” the club said in the statement.

More than 50 members of staff are going to be made redundant, while players sit on huge wages and Ozil's on £350,000-a-week. Pathetic. https://t.co/VigE1jRQVP

Mesut Ozil After Hearing the Job-Cut

Mesut Ozil reading that his club have let 55 people go while he’s chilling on £350k a week doing nothing. pic.twitter.com/b9JNaKnNwE

Arsenal laying off 55 staff. If we assume they're all on avge wage of 28k per year (they won't be) that's saving £1.54 m and that's about a month's wages for Ozil. 55 people getting laid off to pay for a month's wages for one player. What a happy world football is.

Arsenal have announced 55 staff redundancies throughout the club due to financial problems caused by the pandemic..

£350k a week on Ozil but working class staff members are losing their jobs - embarrassing. pic.twitter.com/dpV4YKkfJF

Ozil Earning Highest Wages When Not Even Playing

Ozil getting panned again after this afternoon's announcement. Yes, his wage (which the club happily gave him) is an absolute drain on finances, yes, he didn't take a pay cut when his team-mates did, yes, he's not even playing atm. But Stan Kroenke is worth over £6bn........

Mesut Ozil Turning Up At the Emirates

Ozil turning up at the Emirates trying to lift the mood pic.twitter.com/oVMOhoKVS9

Fans called the decision pathetic and also reacted sharply to Ozil’s decision of refusing to take a pay cut and also over his high salary. The 31-year-old has not played a single game post the season resumption and watched from the stands as Arsenal won the FA Cup and secured a Europa League spot that guaranteed them additional revenue for next season.

(The above story first appeared on LatestLY on Aug 05, 2020 10:01 PM IST. For more news and updates on politics, world, sports, entertainment and lifestyle, log on to our website latestly.com).