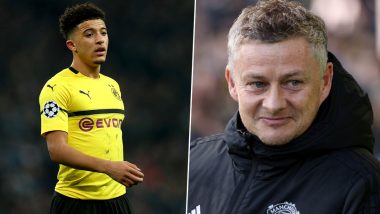 After securing Champions League qualification on the final day of the Premier League 2019-20 campaign, Manchester United are already looking busy in the transfer market to reinforce their squad even further. Jadon Sancho still remains the top priority for the Red Devils, but Solskjaer is looking to strengthen in the other areas as well. The record English champions have identified PSG midfielder Idrissa Gueye as one of the players to add to the squad. Jadon Sancho Transfer News Latest Update: Manchester United Eye Federico Chiesa As Alternative Option to England Star.

According to a recent report from le10Sport, Paris Saint Germain are looking to sell the Senegalese midfielder in the upcoming window. The 30-year-old joined at the start of the season from Everton and has won the domestic treble with the Parisians giants. It is understood that the negotiations for the player will begin once PSG’s Champions League campaign ends. Red Devils Set to Splurge 108 Million Pounds to Land Jadon Sancho from Borussia Dortmund.

As per the news publication, Gueye has a lot of admirers in the Premier League as he has played for Aston Villa and Everton in England’s top division. Manchester United are interested in signing the 30-year-old but will face strong competition from Wolves who are also interested in him.

Idrissa Gueye’s arrival will surely boost the United strength as he was considered as one of the best defensive midfielders in the league during his time at Everton. In 2018-19 the midfielder was named as the Toffees joint player if the year which earned him a move to PSG.

Speaking of Jadon Sancho, the former Manchester City youth academy player is expected to move across the City but his transfer fee is yet to be finalised. Dortmund are unwilling to budge on their €120 million asking price while the Red Devils are prepared to pay a fee of around €70 million.

In case the Jadon Sancho transfer doesn’t go through, Manchester United have already identified an alternative for the English prodigy. Fiorentina’s Federico Chiesa has been pursued by the Red Devils and they have launched an offer for the Italian winger.

(The above story first appeared on LatestLY on Aug 05, 2020 04:50 PM IST. For more news and updates on politics, world, sports, entertainment and lifestyle, log on to our website latestly.com).