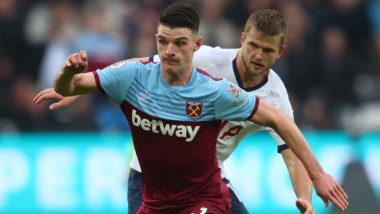 EPL Live Streaming Online in India: Jose Mourinho’s Tottenham Hotspur are in action at home once again, this time against fellow Londoners West Ham United. 8th placed Spurs have all to do in the closing stages of the 2019/20 campaign if they are to push for a Champions League place. They started well against Manchester United but faded out as the game progressed. Nevertheless, a draw would have satisfied them considering how well the Red Devils are playing at the moment. David Moyes, on the other hand, sees his club West Ham United flirt with relegation zone. They will be under pressure in this massive London derby.  Arsenal Player Tested Positive for COVID-19 Before Manchester City Clash, Now Fine: Report.

Lucas Moura and Dele Alli return for Tottenham Hotspur which is a massive boost for the team considering their pace and trickery was missed against Manchester United. Dele Alli should slot in the playmaker role while Lucas Moura might have to content himself with a place on the bench. Harry Kane played 90 minutes in the previous game but is fit enough to start once against tonight. Davison Sanchez and Eric Dier played well in a makeshift defence in the previous game, and the pair will likely continue.

Angelo Ogbonna will undergo a late fitness test to determine his availability for the Hammers while Sebastien Haller and Robert Snodgrass are definitely out. Declan Rice is the makeshift defender in the team and will start in the backline once again. Veteran defender Mark Noble is a bundle of energy in the middle of the park and will shield the defence for the visitors. Michail Antonio, with his powerful presence, could pose a few problems for the opponents in the final third.

Tottenham Hotspur vs West Ham United match in Premier League will be played at the Etihad Stadium on June 24, 2020 (Wednesday). The clash has a scheduled timing of 12:45 am IST.

(The above story first appeared on LatestLY on Jun 23, 2020 03:37 PM IST. For more news and updates on politics, world, sports, entertainment and lifestyle, log on to our website latestly.com).