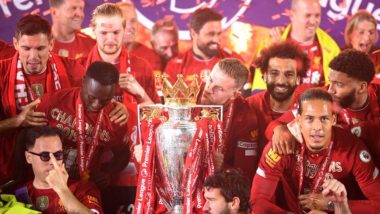 Liverpool picked the EPL 2019-20 last night at Anfield amid loud fireworks. Needless to say that the players were on a cloud nine with the win. A few of them took to social media and posted pictures of themselves and the team where they were seen celebrating the win. Players like Virgil van Dijk, Jordan Henderson, Andy Robertson took to social media and expressed their excitement on social media and posted the photos of the unforgettable moments. Liverpool played their last EPL 2019-20 match against Chelsea which they won 5-3. Liverpool FC Lift EPL 2019-20 Trophy at Anfield Shining Bright With Fireworks! View Pics & Videos of Jürgen Klopp, Mohamed Salah, Team Liverpool & The Reds Fans Celebrate the Historic Win in 30 Years.

Liverpool waited for 30 long years to pick up the honour. Obviously even the official account of the Reds shared the unforgettable moments of the players and posted them on social media. The moments will remain etched in memories of the fans and the players for a very long time. Check out the tweets posted by the players.

Anything is possible. Never stop believing.

It feels fitting for the 96 at Hillsborough we’re lifting this trophy on 96 points. This is for you. #CHAM19ONS pic.twitter.com/nMvKDBXH0c

Ahead of the match, the Anfield had already decorated the stadium not only with a stage but also life-size posters of the players. The Reds last lifted the title in 1990. With this, the team won their 19th league title.

(The above story first appeared on LatestLY on Jul 23, 2020 09:48 AM IST. For more news and updates on politics, world, sports, entertainment and lifestyle, log on to our website latestly.com).