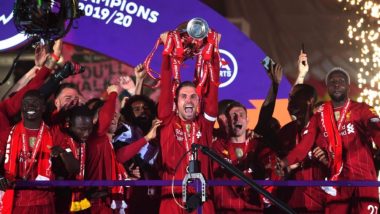 Liverpool finally lifted the EPL 2019-20 trophy after a long wait of 30 years last night at the Anfield after playing against Chelsea. As this happened the netizens went berserk as this happened and they posted their excitement on social media. Normally the fans would have turned up in huge numbers to celebrate with the team but they were at home but with the outspread of the coronavirus, the followers stayed back at home. As usual, the last match was also conducted behind the doors. However, the Anfield was decked up for the big win as they had decorated the stadium with life-size posters of the players. Anfield Decorated With Life-Size Posters of Mohmed Salah & Co As Liverpool FC Clinch EPL After 30 Years (Watch Videos).

The team won to Chelsea by 5-3 but the moment that the fans were waiting for was the game to end so that the Reds could pick up the gong. The fireworks had already started off when the match was coming to a conclusion. Liverpool never had to win the game to pick up the gong as they were already declared as the winners quite a long time ago. As the team lifted the trophy the fans posted their excitement on social media. Check out the tweets below:

Mane 🙈 on his phone for the ENTIRE trophy lift! 🏆 #Liverpool pic.twitter.com/xaJchYsHQW

WE ARE #LIVERPOOL - THIS MEANS MORE - ALWAYS HAS DONE - ALWAYS WILL DO! #YNWA ⭐️⭐️⭐️⭐️⭐️⭐️ pic.twitter.com/50gVi4biPq

After winning the honour many players took to social media and expressed their happiness as the team lift the trophy. The players were seen celebrating the win even inside the dressing room. Jordan Henderson after the match said that he is feeling stronger, more confident and more ruthless.

(The above story first appeared on LatestLY on Jul 23, 2020 09:00 AM IST. For more news and updates on politics, world, sports, entertainment and lifestyle, log on to our website latestly.com).