What is European Super League? Know About the Competition Format, Clubs Participating and Other Important Details of the New Controversial Football Tournament

On Sunday (April 18), as many as 12 leading football clubs, including Juventus, Barcelona and Liverpool, announced the formation of new competition, the European Super League (ESL). It is a midweek tournament that will effectively be a direct competitor for the UEFA Champions League. 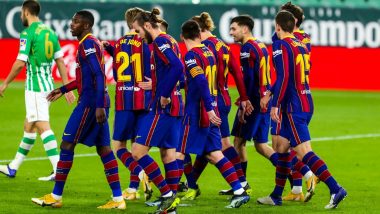 On Sunday (April 18), as many as 12 leading football clubs, including Juventus, Barcelona and Liverpool, announced the formation of a new competition, the European Super League (ESL). It is a midweek tournament that will effectively be a direct competitor for the UEFA Champions League. Unsurprisingly, the news took the football world by storm with the participants earning criticism from governments, their own domestic leagues, football federations, UEFA, and supporters worldwide. The implementation of ESL would be the major shake-up in the history of the European game. Hence, UEFA has opposed the competition, saying that the participants will be banned from other competitions. Meanwhile, here's all you need to know about the newly introduced European Super League. European Super League: Real Madrid, Juventus and Others Agree to Sign Up for New League, UEFA Opposes.

What is European Super League?

The ESL is a new European football competition comprising 20 top clubs. While the 15 founding members will be permanent members of the competition, the remaining five teams will be selected on the basis of annual qualifiers.

When Will It Start?

The clubs said in their statement that they are aiming to start the competition in August. However, the official dates and fixtures are yet to come.

What Will be The Format?

There will be two groups of 10 clubs each, playing home and away fixtures within the group in a season. Following the league stage, the top three sides of both clubs will directly advance to playoffs. Teams finishing fourth and fifth will then fight in a two-legged playoff for the remaining quarter-final positions. A two-leg knockout format will be used to reach the final. However, the summit clash will be a single fixture at a neutral venue.

Who are the Founding Members'?

So far, 12 prominent clubs from different leagues have agreed to be the founding members of ESL. From La Liga, arch-rivals Real Madrid and Barcelona, alongside Atletico Madrid, will participate in the controversial competition. Juventus, Inter Milan and AC Milan are the three Serie A sides to sign up. The remaining six teams are the six Premier League giants, namely Arsenal, Chelsea, Liverpool, Manchester City, Manchester United and Tottenham. As per the plan, three more founding members are to be added. Notably, Bundesliga's Bayern Munich and Paris Saint-Germain (PSG) are currently not interesting in joining the project.

Will The 12 Clubs Face Any Repercussion?

At the moment, all the founding members would be hoping to continue playing in their respective national leagues alongside mid-week fixtures in ESL. However, all the leagues have issued strong statements slamming the club's participation and the new league. Hence, the clubs are all but likely to face massive repercussions if they ply their trade in ESL.

In a long statement, UEFA has strongly said that clubs who participate in the proposed Super League will be banned from UEFA and FIFA football tournaments.

"We will consider all measures available to us, at all levels, both judicial and sporting in order to prevent this happening. Football is based on open competitions and sporting merit; it cannot be any other way. As previously announced by FIFA and the six confederations, the clubs concerned will be banned from playing in any other competition at domestic, European or world level, and their players could be denied the opportunity to represent their national teams," a part of UEFA's statement added.

(The above story first appeared on LatestLY on Apr 19, 2021 11:18 AM IST. For more news and updates on politics, world, sports, entertainment and lifestyle, log on to our website latestly.com).