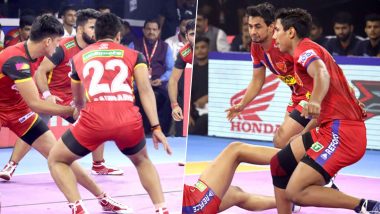 The first semi-final of the VIVO Pro Kabaddi League 2019 will see a battle between Bengaluru Bulls and Dabang Delhi. The match will be played at the Eka Arena in Ahemdabad and will start at 7:30 pm (IST).  Dabang Delhi, who dominated the group stage of the tournament, will step into the encounter with great confidence. While the Bengaluru Bulls defeated the UP Yoddha in the first eliminator will look to continue their stellar run in the tournament. Mean, fans can scroll down to check out the live streaming and the live telecast details of the 1st semi-final of PKL 2019. Bengaluru Bulls Vs Dabang Delhi Live Pro Kabaddi Score Match Semi-Final 1.

The Delhi side finished the group stage of the tournament at the top position by virtue of which they directly advanced to the semi-finals. While the defending champions Bengaluru Bulls, who finished the group stage at sixth position, had to defeat UP Yoddha in the eliminator in order to seal the semis berth. The upcoming clash might well witness a mini-battle between Benagluru’s Pawan Kumar and Delhi’s Naveen Kumar. Both the raiders have been the standout performers for their respective side and will eye to deliver in the semi-final clash too. So, as the countdown begins for the BLR vs DEL semi-final match, let’s focus on the live streaming and telecast details of the match. PKL 2019 Semi-Final 1 Dream11 Prediction for Bengaluru Bulls vs Dabang Delhi: Tips on Best Picks for Raiders, Defenders and All-Rounders for BEN vs DEL Clash.

The match between Bengaluru Bulls and Dabang Delhi will be played on October 16, 2019 (Wednesday) and is scheduled to start at 7:30 pm IST (Indian Standard Time). The Eka Arena in Ahemdabad will be the venue of the match.

The official broadcaster of VIVO PKL 2019 is Star Sports Network. So, the fans who are willing to enjoy the live Hindi commentary can tune into Star Sports 1, Star Gold and their respective HD channels. While Star Sports 2 and Star Sports 2 HD will present the English commentary.

The Delhi side have enjoyed a great run in the ongoing tournament and will fancy their chances to clinch the semi-final clash. On the other hand, the Bulls have won the previous season and are aware of the pressure in knock out games. So, both sides will aim to win the game will advance to the final match. The winner of the second semi-final clash between Bengal Warriors and U Mumba will be the other finalist of PKL 7.

(The above story first appeared on LatestLY on Oct 16, 2019 05:00 PM IST. For more news and updates on politics, world, sports, entertainment and lifestyle, log on to our website latestly.com).