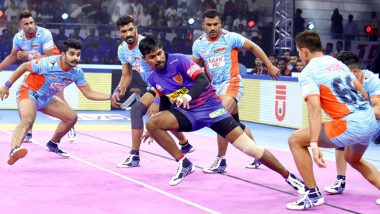 Delhi and Bengal were the top teams in PKL 2019 points table after the end of group stage. Both the teams directly qualified for semi-finals of PKL 2019. Delhi defeated Bengaluru Bulls in the first semi-final while Bengal defeated U Mumba in the second semi-final to book their final clash. Delhi had won 15 matches out of 22 in group stages and topped the points table with 85 points. On the other hand, Bengal ended with just 2 points less on the 2nd spot with 83 points. Ahead of DEL vs BEN, PKL 2019 Final, Here's Look at How Dabang Delhi Fared in Last 5 Matches in VIVO Pro Kabaddi League Season 7.

Both Delhi and Bengal also clashed two times during the group stage. One match ended in a tie 30-30 while the other was won by Bengal Warriors. Now both will aim for the final triumph and will look to clinch the PKL 2019 trophy. Below are the live streaming, live telecast and live scorecard details of DEL vs BEN, PKL 2019 final match. Ahead of Dabang Delhi vs Bengal Warriors PKL 2019 Final, Here's List of Winners of Previous Pro Kabaddi League Seasons.

(The above story first appeared on LatestLY on Oct 19, 2019 07:34 PM IST. For more news and updates on politics, world, sports, entertainment and lifestyle, log on to our website latestly.com).