List of Sportspersons Who Have Tested Positive for COVID-19: From Novak Djokovic to Players From Pakistan Cricket Team, Here’s All Those Who Contracted Coronavirus 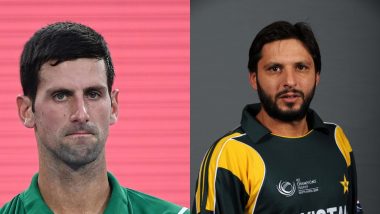 Coronavirus pandemic has suddenly witnessed a new spike in the number of cases in the sporting world. The virus, which first sent shockwaves in the sporting universe after Arsenal manager Mikel Arteta and Chelsea youngster Callum Hudson Odoi tested positive for COVID-19 has suddenly hit back again. Several international Sportstars, like Novak Djokovic and Shahid Afridi, have recently tested positive for the novel virus even as the situation gradually improves in several countries. Novak Djokovic, Wife Jelena Test Positive for Coronavirus; Fourth Tennis Player to Contract Virus at Adria Tour.

The pandemic, which had halted sporting events around the globe since mid-March after a rapid surge in the number of cases in major parts of the world, looks to have struck the sporting world again with several top-notch stars contracting the virus in recent times. The pandemic created havoc in March forcing the world in almost complete shutdown for two months before the situation gradually improved. Take a look at the complete list of sports personalities who have contracted COVID-19 in recent times.

4 Mashrafe Mortaza – Although the news has not been confirmed by the player himself, Mortaza’s brother reportedly told the press that the former Bangladesh captain has tested positive.

10 Haris Rauf – Like Haider Ali, Rauf was to make his maiden England tour but has tested positive after undergoing test at Rawalpindi

11 Viktor Troicki – The Serbian underwent test in Zadar, Croatia and reports showed both he and his pregnant wife had tested positive after participating in an exhibition tennis tour.

12 PSG Players – As the french club resumes training ahead of Champions League restart, three players and one staff member have been tested positive. However, the club stated that 'They are no longer contagious and can carry on their training programme. '

(The above story first appeared on LatestLY on Jun 23, 2020 07:23 PM IST. For more news and updates on politics, world, sports, entertainment and lifestyle, log on to our website latestly.com).