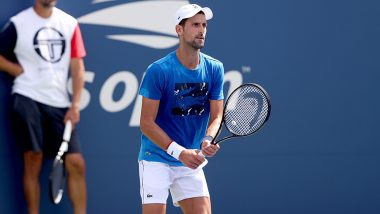 Novak Djokovic, men’s World No 1 Tennis player, has tested positive for coronavirus. The Serbian thus becomes the fourth player, among those that participated in the Adria Tour, to test positive for COVID-19. The Serbian’s wife Jelena has also tested positive for the virus while reports of their two children showed negative results. In a statement, the 17-time Grand Slam winner revealed that he, wife Jelena and their two children had undergone tests for COVID-19 immediately after reaching Belgrade from Zadar in Croatia where the final of the Adria Tour was cancelled after Grigor Dimitrov had contracted the virus. Novak Djokovic’s Video of Partying With Fellow Tennis Players Goes Viral After Grigor Dimitrov and Borna Coric Test COVID-19 Positive.

Earlier, Croatia’s Borna Coric, who played Bulgarian Dimitrov on Saturday, had revealed that he had also tested positive while Serbian Viktor Troicki and his pregnant wife had similar results after playing Adria Tour exhibition tournament hosted by Djokovic and played in full stadiums without any social distancing or precautions.

“I am extremely sorry for each individual case of infection. I hope that it will not complicate anyone’s health situation and that everyone will be fine,” the top-ranked Serbian said in a statement. “I will remain in self-isolation for the next 14 days, and repeat the test in five days.” He had come under severe criticism after hosting the exhibition tournament in Serbia, Croatia, Montenegro and Bosnia despite warnings of there being a spike in coronavirus cases in some of those countries. Montenegro government had stepped in and cancelled the event.

But despite the criticism coming his way, Djokovic defended his decision to organise the tournament. “Everything we did in the past month, we did with a pure heart and sincere intentions. Our tournament meant to unite and share a message of solidarity and compassion throughout the region,” he said in the statement. “We organized the tournament at the moment when the virus has weakened, believing that the conditions for hosting the Tour had been met.

“Unfortunately, this virus is still present, and it is a new reality that we are still learning to cope and live with.” Organisers of the Adria Tour claimed that the Serbian had shown no symptoms of the virus. Most of the players that participated in the tour had stayed back in Zadar to undergo tests after the final was cancelled following Dimitrov’s positive result.

(The above story first appeared on LatestLY on Jun 23, 2020 06:05 PM IST. For more news and updates on politics, world, sports, entertainment and lifestyle, log on to our website latestly.com).