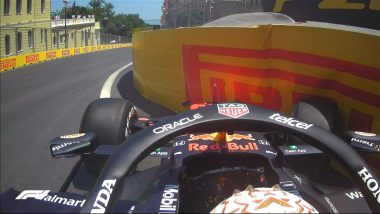 The winner of the Monaco Grand Prix 2021 Max Verstappen was zapped after his gaffe in the third practice session of the Azerbaijan Grand Prix 2021. The Dutch driver was seemingly frustrated at the Baku Circuit City after crashing against one of the signboards in the third practice session. Verstappen was running wide on a narrow left-hand corner. Just then the low-speed impact of the barrier on the exit damaged the suspension on Verstappen's car and he moved out of the race. This happened at Turn 15.  The session had to be stopped for a while so that his car could be recovered. Pierre Gasly Comes First in Third Practice Session in 2021 Formula 1 Azerbaijan Grand Prix, Lewis Hamilton Finishes Third.

Now, let's have a look at the video shared by F1 below:

Here's the final standing of the third practice round:

(The above story first appeared on LatestLY on Jun 05, 2021 05:04 PM IST. For more news and updates on politics, world, sports, entertainment and lifestyle, log on to our website latestly.com).