Zverev holds a clear 3-0 advantage over his Canadian opponent and would be walking into this match with a lot of confidence. 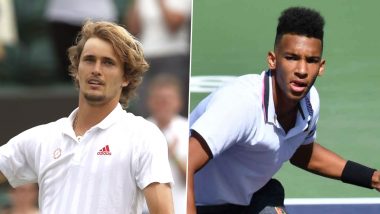 German tennis star Alexander Zverev would take on Felix Auger-Aliassime in the fourth round with a spot in the semi-final up for grabs. The match would be played at Court 1 and would begin at 06:45 PM IST (Indian Standard Time). Since last year's Australian Open, Zverev has displayed a lot of consistency and despite a strong challenge from Taylor Fritz in his last match, the German dug deep to secure a win and progress to the fourth round. This year, Zverev has competed in 37 matches in all competitions and has won 27 of them and he would certainly be a favourite, heading into this tie. Feliz Auger-Aliassime on the other hand, have had some good form. He clinched a memorable win over Swiss great Roger Federer in Halle Open, few weeks ago and the 20-year old would aim at causing some more upsets in his first fourth-round appearance. Coco Gauff vs Angelique Kerber, Wimbledon 2021 Live Streaming Online: How to Watch Free Live Telecast of Women's Singles Tennis Match in India?

In terms of head-to-head records, Zverev has won all three contests between them and this time, it would be the first occasion when they are facing off against each other in a grass court at a major competition.

What is the Date, Time, Schedule and Venue of Wimbledon 2021 Alexander Zverev vs Felix Auger-Aliassime Men's Singles Fourth Round Match?

Alexander Zverev vs Felix Auger-Aliassime's fourth-round match in Wimbledon 2021 will take place on July 05, 2021 (Monday). The match will be played on Centre Court and will start at 06:45 pm IST (Indian Standard Time).

Where to Watch the Live Telecast Wimbledon 2021 Alexander Zverev vs Felix Auger-Aliassime Men's Singles Fourth Round Match? Which TV Channel Will Broadcast it LIVE in India?

Where to Watch the Live Streaming of Alexander Zverev vs Felix Auger-Aliassime Men's Singles Round 4 Match Online in India?

(The above story first appeared on LatestLY on Jul 05, 2021 05:15 PM IST. For more news and updates on politics, world, sports, entertainment and lifestyle, log on to our website latestly.com).