Apart from the general reactions, there were tweets asking the Australian Open Grand Slam management the reason for holding the major despite the devastating bushfire and now the muddy rain. 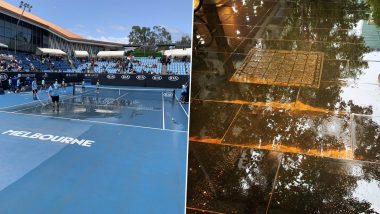 Melbourne, January 23: Melbourne was hit with "dirty downpour" and "brown rain" after mud fell along with the rain on Wednesday. The downpour covered Australian Open courts in thick mud and the courts had to undergo a thorough cleaning. Twitter was left gasping after images emerged of the blue courts covered in orange or red dirt from the Melbourne Park. Australian Open 2020: Roger Federer, Novak Djokovic, Serena Williams in 3rd Round.

Apart from the general reactions, there were tweets asking the Australian Open Grand Slam management the reason for holding the major despite the devastating bushfire and now the muddy rain. Australian Open 2020 Live Streaming & Match Time in IST: How to Watch Free Live Telecast of Tennis Grand Slam on Star Sports TV Channel and Hotstar Online in India.

Due to the rain and dust overnight the outside courts need high pressure cleaning, which is currently underway. Start of play has been delayed until midday. Updates to come.

A First in Grand Slam Tennis

"Rain and dust overnight" - this has to be a first in Grand Slam tennis https://t.co/RhYl3V02Q2

Dusty rain has fallen on #Melbourne and played havoc with the @AustralianOpen schedule. Everything’s got an orangey brown tinge to it including the courts, the Yarra and the cars. pic.twitter.com/dYYATpdGJ5

The Cleaning Work on War Footing

Wow tough situation with rain last night and a dust storm in Melbourne. Courts team working hard to get courts cleaned and ready for play. You can see the orange dust on court #AusOpen pic.twitter.com/Whpo8EGIYK

Wondering where all that dust ended up? pic.twitter.com/LZM4aXVTVJ

The rain resulted in the delay of matches by close to couple of hours. The workers at Melbourne Park worked overtime to get rid of the red or orange mud that had accumulated on the court. Australian Open 2020 Men's Singles: Djokovic, Nadal, Federer, Daniil Medvedev & Dominic Thiem, 5 Players to Watch Out For in Tennis' First Grand Slam of The Year.

"Due to the rain and dust overnight the outside courts need high-pressure cleaning," tweeted the organisers. "Our team is working across Melbourne Park to prepare the outside courts for play," they added. The dirty rain, blamed on smoke hanging in the air from Australia's raging bushfires, is just the latest hazard at a tournament that has been beset by meteorological mishaps, reported AFP.

(The above story first appeared on LatestLY on Jan 23, 2020 07:33 PM IST. For more news and updates on politics, world, sports, entertainment and lifestyle, log on to our website latestly.com).