Australian Open 2022: From Novak Djokovic To Rafael Nadal, 5 Players To Watch Out For in Men's Singles Draw in Melbourne

Serbian superstar Novak Djokovic is the defending champion and won his record ninth title – the most at the competition – last year and will be hoping to retain the championship while others look to dethrone him. 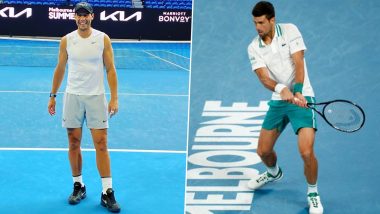 The Australian Open 2022 will be the 110th edition of the prestigious Grand Slam and several tennis stars around the globe will be competing in order to become the new champion. Serbian superstar Novak Djokovic is the defending champion and won his record ninth title – the most at the competition – last year and will be hoping to retain the championship while others look to dethrone him. So we take a look at the five men’s players to watch out for the Australian Open 2022. Novak Djokovic Prepares for Australian Open 2022, Pictures of His Practice Session Goes Viral (See Pics).

First held in 1905 as the Australasian Championships, the Australian Open has grown to become one of the biggest sporting events and marks the start of the new season as it is the very first Grand Slam of the year. The championship will once again feature some of the biggest superstars as many veterans aim to add further to their illustrious careers while youngsters hope to break through and make a mark. Rafael Nadal Comments on Novak Djokovic's Visa Controversy, Says 'Much Rather He Didn’t Play'.

The Austrian tennis star is one of the dark horses in the competition and will be aiming for his first Australian Open title. Theim is making a comeback to competitive action after a six-month lay-off due to a wrist injury. The 28-year-old reached the finals in the 2020 edition and will look to go a step further this time around.

The 24-year-old has been producing brilliant performances in recent years and will feel that he can finally win his first Grand Slam after some near misses. The German has been consistent since his Wimbledon disappointment, winning four titles in that time and will be hoping to reach his maiden Australian Open final and even go all the way.

Rafael Nadal has been struggling with injuries in recent months and only returned to action earlier this year. The Spaniard is tied with fellow rivals Djokovic and Federer on 20 Grand Slam titles and will be aiming to move clear of them as he competes in his first major competition since August.

The 25-year-old has been outing up consistent performances in recent Grand Slams and will be a major contender for the Australian Open 2022 title. The Russian defeated Novak Djokovic in last year’s US Open final to win his maiden Grand Slam and after reaching the finals in Melbourne last year, will hope to go one step ahead to claim his maiden title at the venue.

With all the issues regarding his visa, Novak Djokovic will be motivated to defend his Australian Open crown and record his 10th title at Melbourne Park. The Serbian is chasing a 21st major singles title and will start as one of the favourites.

(The above story first appeared on LatestLY on Jan 12, 2022 05:53 PM IST. For more news and updates on politics, world, sports, entertainment and lifestyle, log on to our website latestly.com).