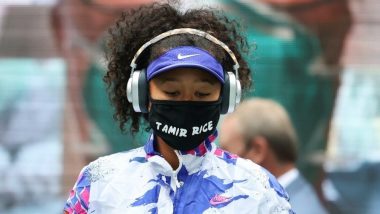 Naomi Osaka drew attention on the courts of the Ashe Arthur Stadium as she stepped on to the finals of US Open 2020 as she drew attention to racism. As the 22-year-old stepped on to play against racism, Osaka donned a mask with Tamir Rice’s emblazoned on it. Tamir Rice was a 12-year-old boy who was killed by the police in Cleveland in 2014. The Japanese tennis ace had come prepared with seven masks for each round. The gesture clearly impressed the netizens as they praised her for raising her voice against police brutality and racial injustice. Naomi Osaka Reacts After Defeating Victoria Azarenka in US Open 2020 Finals, Twitter Goes Berserk Congratulating Japanese Tennis Ace (Read Tweets).

Prior to this, she had donned masks of Breonna Taylor, Elijah McClain, Ahmaud Arbery, Trayvon Martin, George Floyd and  Philando Castile. Each of these names was the victims of social injustice and police brutality. This is not the first time that the Japanese tennis ace has raised her voice for black lives. Now, let's have a look at the video and the tweets by the netizens hailing the act.

Naomi Osaka walked out to her U.S. Open final in a Tamir Rice mask

She wore a mask for each round of @usopen to remind us that she fought 4 so much more off the court: Justice 4 Breonna Taylor, Elijiah McClain, Ahmaud Arbery, Trayvon Martin, George Floyd, Philando Castile, Tamir Rice and many more. Thank you @naomiosaka #morethananathlete #hope pic.twitter.com/CuSGVg4sy5

Thank you, Naomi. Bless the souls of the lives lost, and Bless you. Tamar Rice...an innocent child. 🙏🏾✊🏾🏆

Thank you for using your voice ♥️ pic.twitter.com/pjPnUtPEKv

Naomi Osaka got to wear all seven masks she brought to the #USOpen, bearing these names:

"I would definitely say it's been an important few months," Osaka told reporters after coming from a set down to beat Victoria Azarenka 1-6, 6-3, 6-3, inside Arthur Ashe Stadium. Talking about the finals Naomi went on to beat  Victoria Azarenka to claim her second US Open title in three years.

(The above story first appeared on LatestLY on Sep 13, 2020 09:40 AM IST. For more news and updates on politics, world, sports, entertainment and lifestyle, log on to our website latestly.com).