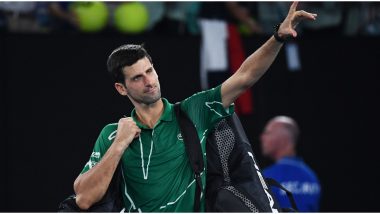 Serbian tennis star Novak Djokovic and his wife Jelena has been tested positive for COVID-19 virus after coming off from the Adria Tour 2020 which was organized in Belgrade, Serbia. On Tuesday (June 23), the World No. 1 tennis player himself broke the news to the fans. The 33-year-old revealed that he and his wife has been tested positive while the result of his children came negative. Overall, Djokovic is the fourth player after Viktor Troicki, Grigor Dimitrov and Borna Coric to be tested positive after participating in Adria Tour 2020. As the news of Djokovic being infected came out, fans from all over the world took to social media and wished for tennis ace’s speedy recovery. Novak Djokovic, Wife Jelena Tests Positive for Coronavirus; Fourth Tennis Player to Contract Virus at Adria Tour.

The exhibition Tennis tournament was organized by Djokovic himself as many major tennis events were missed in the past few months due to the global health scare. However, the tennis legend received a lot of criticism after Grigor Dimitrov and Borna Coric were tested positive. Also, fans gathered in large numbers to see their favorite tennis stars in action and the players were seen hugging, shaking hands and posing the photographs during the contest. Hence, social distancing rules weren’t followed. Meanwhile, let’s look at how Twitterati reacted when they came across the news of Djokovic being tested positive.

Novak Djokovic And His Wife Jelena Has Been Tested Corona Positive While There Children Is Tested Negative. Prayers For There Speedy Recovery 🙏

World no.1 Novak Djokovic and wife Jelena have tested positive for coronavirus. pic.twitter.com/DGVpi9zyNw

@DjokerNole , I guarantee you will bounce back very soon. Take care.

The finals of the exhibition tournament were eventually called off following the positive test of players. Also, a video of Djokovic partying with Alexander Zverev, Dominic Thiem and other fellow players went viral on social media which can put the tennis star under the scanner.

(The above story first appeared on LatestLY on Jun 23, 2020 06:25 PM IST. For more news and updates on politics, world, sports, entertainment and lifestyle, log on to our website latestly.com).