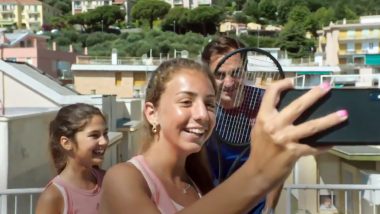 Tennis superstar Roger Federer recently joined two young girls, who took the social media by storm, in a rooftop tennis match. Amid the lockdown in Italy due to the coronavirus pandemic, 13-year-old Vittoria and 11-year-old Carola became overnight sensations after a video of their rooftop match impressed many people on online platforms. In the video, the young girls could be seen playing tennis on top of the rooftop of two different buildings in Liguria, Italy. Italian Tennis Youngsters Happy to Hit the Roof During Coronavirus Pandemic.

Three months on from their viral video, the girls were brought together saying they would be interviewed for their online fame but were left shell-shocked after Roger Federer joined them. Not only did the Swiss star met the girls but also got into action, played a few rallies across the rooftop of the buildings. Roger Federer Looking to Return to Training in August, Says Coach Severin Luthi.

The video was shared by Italian pasta brand Barilla, and both the girls could be seen praising the tennis legend. ‘If I were to meet him, I would jump on him or I would be starstruck!’ said 13-year-old Vittoria. Soon after that Federer came out in front of them. ‘We cannot believe it, Federer is on our rooftop!’ said the young girls.

Incredible to see... again! One of the most spectacular and unusual tennis matches we have seen in a while. 📍 Liguria, Italy 🇮🇹 @rogerfederer #TheRooftopMatch pic.twitter.com/a7FfCSkvr0

The 38-year-old Swiss star was touched by the perseverance shoed by the young Italians amid such difficult times. ‘Personally, for me, that was a very special moment in my career as a tennis player, Federer said. 'To surprise a fan, or children, like I was able to with Carola and Vittoria today’ the Swiss star added.

Federer also enjoyed himself as is was the first time he was playing at such an unusual location. ‘It was great. I have played in many cool places around the world. But this is definitely up there for me as a special experience,’ said the 38-year-old.

(The above story first appeared on LatestLY on Aug 01, 2020 01:42 PM IST. For more news and updates on politics, world, sports, entertainment and lifestyle, log on to our website latestly.com).