The Nokia C30 smartphone's specifications and renders have been tipped online ahead of its launch. Nokiapoweruer has shared the images of the device on its website. 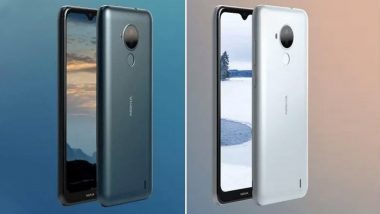 The Nokia C30 smartphone's specifications and renders have been tipped online ahead of its launch. Nokiapoweruer has shared the images of the device on its website. The leaked renders showcase the front and the rear design in two shades. The dual rear cameras are housed in a circular camera module with an LED flash. Below the camera module, there is a fingerprint scanner. At the front, there is a waterdrop notch for the selfie snapper. The smartphone was also spotted on the US Federal Communications Commission hinting towards its imminent launch. Nokia G20 Smartphone With MediaTek Helio G35 SoC Launched; Check Prices, Features & Specifications.

A Russian retailer 4Dealer is revealed that the Nokia C30 will feature a 6.82-inch FHD+ display with a resolution of 2400x1080 pixels. It is expected to be powered by an unidentified 1.60 GHz chipset with 3GB of RAM and 64GB of internal storage. For photography, it might come equipped with a 13MP main camera and an unknown sensor. At the front, there could be a 5MP shooter for selfies and video calls.

The handset is expected to run on the Android 11 operating system. Connectivity options could include Wi-Fi, Bluetooth v4.2, GPS, micro USB and a 3.5mm headphone jack. Nokia C30 will also get a rear-mounted fingerprint scanner and a face unlock feature.

(The above story first appeared on LatestLY on Jul 12, 2021 01:57 PM IST. For more news and updates on politics, world, sports, entertainment and lifestyle, log on to our website latestly.com).