A new Milky Way map revealed that the planet Earth is closer to the massive black hole, than previously thought. The map by Japanese space experts has put the blue planet 2,000 light-years closer to the black hole at the centre of our galaxy. 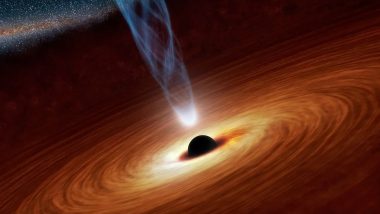 Over the years, we have had various speculations suggesting that the world is heading towards the end, and the year 2020 has seen it more. With the ongoing pandemic, that does not seem to end soon; there have been many conspiracy theories claiming the end of the world possibilities. The Mayan calendar’s apocalypse prediction and the Bible prophecy of first ‘red heifer’ born are the prime theories that surfaced online; making many believe that doomsday is near. Now, a new Milky Way map revealed that the planet Earth is closer to the massive black hole, than previously thought. Yes, you read that, right! The map by Japanese space experts has put the blue planet 2,000 light-years closer to the black hole at the centre of our galaxy. Does it hint end of the world too?

A black hole is a region of spacetime where gravity is so strong that nothing, no particles or electromagnetic radiation such as light can escape from it. Because no light can get out, people cannot see black holes. Space telescopes with special tools can only help to find black holes. In October, 2020, pictures captured by European Southern Observatory (ESO) showed how a star was eaten by a supermassive black hole, shredding it into pieces. There have been some darkest discoveries by scientists revealing what leads to the formation of black holes and how this invisible and extremely heavy object is at the centre of our galaxy. Roger Penrose, Reinhard Genzel and Andrea Ghez received Nobel Prize in Physics 2020 for their discoveries on the black hole.

According to the International Astronomical Union, in 1985, it stated that the Earth is located at the value of 27,700 light-years away. However, the recent development made by the new map of the Milky Way places Earth just 25,800 light-years away from the centre of the galaxy, where the black hole resides. This means that our blue planet is now nearly 2,000 light-years closer to the black hole. The new map was reportedly constructed by the astronomers from the National Astronomical Observatory of Japan (NAOJ). The finding is developed using data collected over the last 15 years.

Does this mean that end of the world is near? Scientists state that there is nothing to worry, Earth is not plunging into the black hole anytime soon, as it is still thousands of light-years away from the black hole. Based on the information obtained, the astronomers analysed the position and also the velocity map of the galaxy. The velocity component of the map suggests that the planet is travelling at 227 km/s, faster than the official known value of 220 km/s.

The black found at the centre of our galaxy is called Sagittarius A* and is believed to be 4.2 million times more massive than the Sun. The map for the recent discovery was developed by VLBI Exploration of Radio Astrometry (VERA) project of the National Observatory of Japan. The project used astrometry, the accurate measurement of the position and motion of objects, to understand the overall structure of Milky Way and Earth’s position in it.

(The above story first appeared on LatestLY on Dec 03, 2020 02:46 PM IST. For more news and updates on politics, world, sports, entertainment and lifestyle, log on to our website latestly.com).