What is Black Hole? Can Black Holes Destroy Earth? All FAQs Answered About The Most Mysterious Object in Space

Black holes are among the most mysterious and fascinating objects in outer space. So what is a black hole? 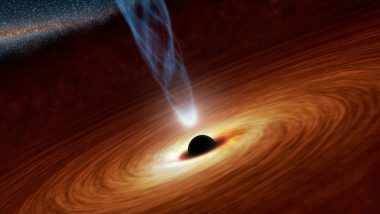 New Delhi, October 19: Black holes are among the most mysterious and fascinating objects in outer space. Conspiracy theories such as black holes eat stars and planets always do rounds. So what is a black hole? In simple words, a black hole is a place in space with extremely strong gravitational power. Albert Einstein first predicted the existence of black holes in 1916. However, the term "black hole" was coined by American astronomer John Wheeler in 1967. Black Holes Are More Like Holograms, Say Scientists.

What is a Black Hole?

According to National Aeronautics and Space Administration or NASA, a black hole is a place in space where gravity pulls so much that even light can not get out. Black holes are invisible because no light can get out. Therefore, people can't see black holes. Scientists use space telescopes with special tools to find black holes. Research over the years has shed some light on black holes, their size and how they are formed. Black Hole Devours a Star, Almost The Size of The Sun, Like a Spaghetti! Astronomers Able to Capture 'Tidal Disruption Event' (Check Pic).

How Big Are Black Holes?

Can a Black Hole Destroy Earth?

Many believe black holes go around in space eating stars, moons and planets. Scientists have debunked this perception. Earth is facing no threat because no black hole is close enough to the solar system for our planet. According to NASA, even if a black hole the same mass as the sun replace the sun, Earth still would not fall in. Instead, Earth and the other planets would continue to orbit the black hole as they currently orbit the sun.

(The above story first appeared on LatestLY on Oct 19, 2020 04:55 PM IST. For more news and updates on politics, world, sports, entertainment and lifestyle, log on to our website latestly.com).

Comments
Tags:
Back Hole Back Hole Formation Back Hole Size Back Holes Earth
Comments
You might also like