The Nobel Prize 2020 in physics was on Tuesday awarded to Roger Penrose, Reinhard Genzel and Andrea Ghez. 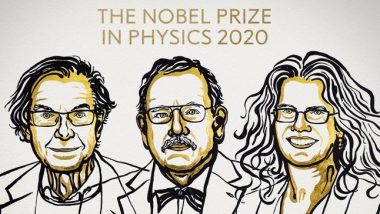 Stockholm, October 6: The Nobel Prize 2020 in physics was on Tuesday awarded to Roger Penrose, Reinhard Genzel and Andrea Ghez for their discoveries on the black hole. The Nobel Prize 2020 in physics was divided, one half awarded to Roger Penrose the other half jointly to Reinhard Genzel and Andrea Ghez, said the Royal Swedish Academy of Sciences. Thr prize money, 10 million Swedish kronor, will also be divided, with one half to Penrose and the other half jointly to Genzel and Ghez. Nobel Prize in Medicine 2020 Winners: Harvey J Alter, Michael Houghton and Charles M Rice Receive The Honour For Hepatitis C Virus Discovery.

Roger Penrose was awarded the Nobel Prize in Physics for "the discovery that black hole formation is a robust prediction of the general theory of relativity". Reinhard Genzel and Andrea Ghez received the prestigious honour for "the discovery of a supermassive compact object at the centre of our galaxy". Penrose showed that the general theory of relativity leads to the formation of black holes. Genzel and Ghez discovered that an invisible and extremely heavy object governs the orbits of stars at the centre of our galaxy. Nobel Prize 2019 in Physics Winner: James Peebles, Michel Mayor and Didier Queloz Jointly Awarded Honour.

The Royal Swedish Academy of Sciences has decided to award the 2020 #NobelPrize in Physics with one half to Roger Penrose and the other half jointly to Reinhard Genzel and Andrea Ghez. pic.twitter.com/MipWwFtMjz

Genzel completed his PhD from the University of Bonn in 1978. He is also the Director at Max Planck Institute for Extraterrestrial Physics, Garching. Ghez, who was born in 1965 in New York, has done PhD from California Institute of Technology, Pasadena, in 1992. He is currently a professor at the University of California, Los Angeles.

(The above story first appeared on LatestLY on Oct 06, 2020 03:55 PM IST. For more news and updates on politics, world, sports, entertainment and lifestyle, log on to our website latestly.com).