British scientists have warned of a "pretty miserable winter" in the UK this year due to new respiratory viruses likely to emerge, with further lockdowns a possibility. 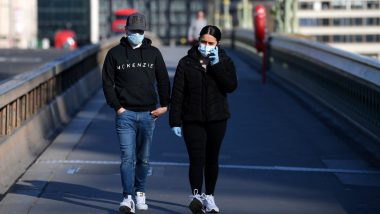 London, June 21: British scientists have warned of a "pretty miserable winter" in the UK this year due to new respiratory viruses likely to emerge, with further lockdowns a possibility.

Professor Calum Semple, member of the government's Scientific Advisory Group for Emergencies (SAGE), said that children and elderly people will be especially vulnerable to endemic viruses at the end of the year, Xinhua news agency reported.  UK Scientists Develop Electronic Gadget 'COVID Alarm' That Sniffs Out COVID-19 in Crowded Space

Describing it as the "fourth wave winter", he told Times Radio on Sunday "there's a sting in the tail after every pandemic" because social distancing will have reduced people's exposure to usual endemic respiratory viruses such as pneumonia and bronchiolitis.

"I suspect we'll have a pretty miserable winter because the other respiratory viruses are going to come back and bite us quite hard," he said.

"But after that, I think we'll be seeing business as normal next year."

Meanwhile, Susan Hopkins, Public Health England's director for COVID-19, warned "we may have to do further lockdowns this winter" depending on whether hospitals start to become overwhelmed.

"I think we will have alternative ways to manage this, through vaccination, through anti-virals, through drugs, through testing that we didn't have last winter," she told the BBC.

Scientists have warned that a third wave of coronavirus infections is "definitely underway" in England due to the fast spread of the Delta variant, even though hospital admissions will hopefully not be on the same scale as in January.

(The above story first appeared on LatestLY on Jun 21, 2021 12:01 PM IST. For more news and updates on politics, world, sports, entertainment and lifestyle, log on to our website latestly.com).