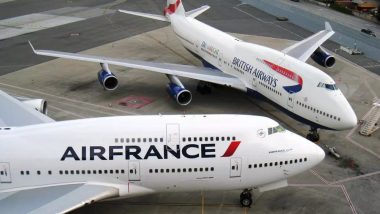 Paris, July 2: The French government has confirmed that flag carrier, Air France would cut nearly 7,600 posts due to the COVID-19 pandemic, calling on the airline to make as few compulsory redundancies as possible.

Local media reported that the flag carrier would slash its workforce by 40 per cent by 2022 as the pandemic has badly hit international travel, reports Xinhua news agency.

It would also cut 1,025 jobs at its domestic carrier Hop!.

"Indeed, these figures were presented yesterday in an extraordinary company meeting. These figures depend a lot on the enterprises' devices and the traffic's resumption," Minister of State for Transport Jean-Batiste Djebbari on Wednesday told BFMTV news television.

The French state, which owns 14.3 per cent of the French-Dutch venture Air France-KLM group, called on the airline's executive officials to reduce forced redundancies as much as possible by favouring voluntary departures.

In April, the French government has offered a 7-billion-euro ($7.91 billion) aid package to rescue Air France, whose planes have been grounded by virus lockdowns around the world.

"It is not seven billion, as I have heard, to pay for redundancy plans, it is seven billion to be able to survive, to be able to pay wages at the end of the month," the Minister said, adding that "Air France is losing hundreds of millions of euros every month".

In its last published traffic data, Air France posted a 52.5 per cent drop in revenues after it had carried 58.8 per cent fewer passengers in March than the same month in 2019.

(The above story first appeared on LatestLY on Jul 02, 2020 11:06 AM IST. For more news and updates on politics, world, sports, entertainment and lifestyle, log on to our website latestly.com).