China has launched a campaign against halal food products in its Muslim majority Xinjiang province, claiming that the Islamic ritual fuels extremism and penetrates secular values. 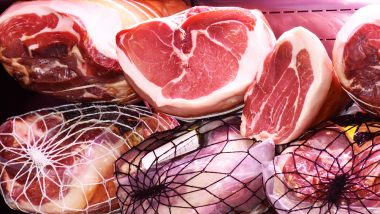 China has come under major international criticism for cracking down on Muslim Uighur minority in Xinjiang which it suspects of having secessionist tendencies.

In a meeting earlier this week, the authorities in Xinjiang's capital Urumqi vowed to launch a campaign against the pan-halal tendency, the Global Times said in a report.

"In the past, the rising pan-halal tendency has fuelled the dislike of religions in China as some demand that things be halal which cannot really be halal and a suspected trend of Islamic rituals penetrating into secular life," the report said.

"Take the lead to free minds and shake off conventional thinking," Liu Ming, Secretary of the leading Party members' group of the People's Procuratorate of Urumqi, told local officials at the Monday meeting. In US-China Trade War, India Eyes to Cut Down Trade Deficit With Beijing: Report.

Some companies put halal labels on milk, toothpaste and tissues. In 2016, passengers on China Southern Airlines' flight to Urumqi expressed their anger, after the flight only served halal food, the report said.

Of some 21 million Muslims in China, 12 million live in far-west Xinjiang province. Most Muslims here are Turkic speaking Uighurs who China sees as separatists and having links with terrorist groups.

China has reportedly kept up to 1 million Uighurs in detentions camps where they are "indoctrinated".

In the past, Chinese authorities reportedly confiscated the Quran from Uighurs in Xinjiang and told them not to choose names for their children which sound too Islamic.

(The above story first appeared on LatestLY on Oct 10, 2018 06:57 PM IST. For more news and updates on politics, world, sports, entertainment and lifestyle, log on to our website latestly.com).